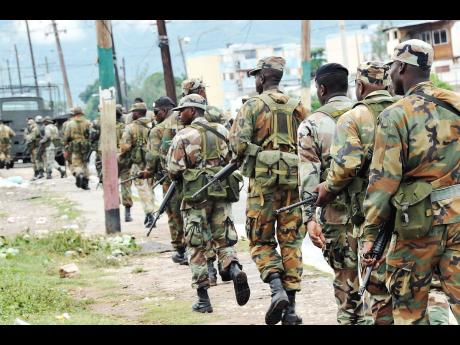 Norman Grindley
Soldiers stream into Rema on July 18, 2010 as the security forces fanned out across the Corporate Area to net gangsters and guns in the West Kingston Police Division in during a state of emergency in the aftermath of the capture of criminal kingpin Christopher Coke.

The majority of Jamaicans would support the temporary suspension of their rights and accept military rule under a coup in order to curtail high levels of crime and corruption.

That is the finding of a comparative study of democracy and governance, as part of the Political Culture of Democracy in Jamaica Survey in the Americas 2016-17.

Professor Anthony Harriott of the Institute of Criminal Justice and Security at the University of the West Indies, Mona, presented the findings in Kingston yesterday.

The Jamaican aspect of the study is part the Americas Barometer Survey implemented through the Latin American Population Project (LAPOP) and funded by the United States Agency for International Development (USAID). Questions were posed to 1,515 Jamaicans during the period January 29-30, 2017.

crime situation that persisted since 2010 and which resulted in a 30 per cent decline in all serious crime immediately after their intervention," Harriott said.

Jamaicans with higher levels of education and wealth, urban residents, males and older cohorts offer less support for a coup. In addition, less than half the population with post-secondary education levels, in the highest wealth quintile, or 56 years or older, support a military takeover when factored into demographics and socio-economic subgroups.

"The majority of Jamaicans are committed to democratic stability but I want to highlight that the evidence in this data suggests that when it comes to the attitude of our population in regards to the control and the management of the crime situation and corruption in our country, I believe that red line has been crossed," Harriott said.

"The Jamaican military, I think, is one of the best among developing countries. I think they are committed to democratic principles, so I don't expect anything spectacular to occur such as a military coup," he said.

The Jamaica Defence Force has been active in recent months having been called upon to support the police in the zones of special operations and the states of public emergency in Kingston, Montego Bay, St James and in Spanish Town and its environs to clamp down on murders and other crime.