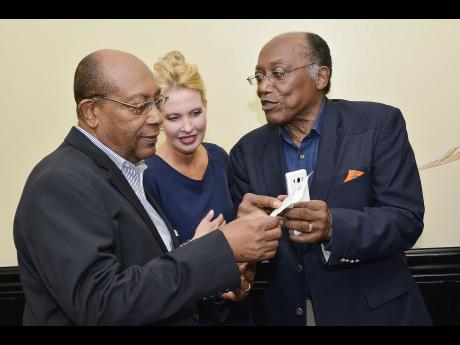 Lionel Rookwood
Dr Henry Lowe (left) and Professor Errol Morrison, director general, National Commission on Science and Technology, converse before the start of the official signing of the memorandum of agreement between the Jamaican Medical Cannabis Corporation and the National Foundation for the Development of Science and Technology held at Courtleigh Hotel and Suites on Monday. Sharing in the moment is Diane Scott, CEO, Jamaican Medical Cannabis Corporation.

Professor Errol Morrison, director general of the National Commission on Science and Technology, has lamented the unwillingness of Jamaican investors to support local research and science, even where there was ample proof that just a little more financing could go a far way in advancing Brand Jamaica.

Morrison was speaking Monday at the signing of a memorandum of agreement for an unprecedented US$2-million (J$264-million) study to facilitate scientific identification and validation of indigenous strains of Jamaican ganja.

Under the 10-year project, titled 'Identification, Isolation and Conservation of Local Strains of Cannabis for Medicinal Use', Jamaica Medical Cannabis Corporation (JMMC), a Jamaican-Canadian-based company, has committed to funding the research to capture the genetic profiles, chemical characteristics and other profile features of the many local strains.

The professor cited a 2006 study conducted by Trevor Hamilton & Associates of a survey of consultancies and problem-solving projects awarded to local consultants and researchers to support his point about the dismal response to the efforts of local scientists.

"Of the consultancies awarded, both Government and private sector combined, two per cent was awarded to our local scientists and consultants. A degeh-degeh two per cent, what does that say to you?" he asked during the signing ceremony at The Courtleigh Hotel and Suites, New Kingston.

"And what we're witnessing here is that a team from the north has come home to us here and has observed our capacity, our credibility, our capability and has said to us, 'We believe in you and we will invest in you.'"

"It is that kind of context that has been heavy on my breast for years ... . When we have an external force coming and putting its confidence in us, I say the future can augur well. [With] this kind of commitment, we in the scientific community have to make good; and we shall be holding the JMCC to their commitment as well," Morrison said.