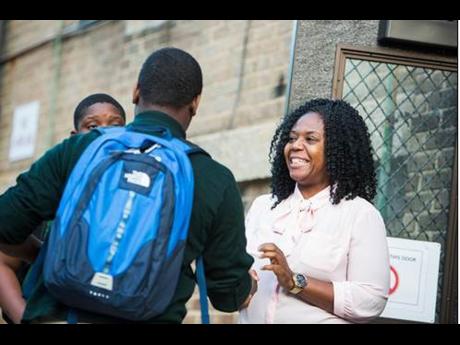 It was Jody-Anne Jones' zeal to transform the lives of students who struggled with reading when she became principal of North Star Academy Clinton Hill Middle School of Newark. However, it was a huge surprise when the Jamaica-born professional was one of two principals in the United States who were honoured with the 2018 Ryan Award for exceptional school leadership.

The national award honours urban principals who are closing the achievement gap between children from lower economic strata and those from affluent backgrounds.

In an interview with The Gleaner, Jones indicated that when students enter the Clinton Hill campus as fifth-graders, they lag behind students from more affluent districts on state exams. However, by the eighth grade, they were able to close the gap. Her students outperformed their peers by almost 30 percentage points in mathematics and 15 percentage points in language arts.

"A lot of the work that I do does not only make sure that students get strong results and that teachers are trained to help students to think critically, but also to make sure that we are building their core values of respect, care and responsibility," said Jones, who has been at the helm of the institution for the last six years.

"I am consciously making every effort to ensure that I create these opportunities for my students, and at the same time, inspiring my staff to want to go above and beyond for the kids. Overall, it has been great, but it definitely has some challenging days," she continued.

The 36-year-old, who hails from Manchester, said that the tremendous improvement in students' ability to read and comprehend is a proud moment for her.

"One of our focus[es] was to make sure that our students are stronger readers and, so, we strengthened a programme where our students in fifth grade, in particular, read a million words, and they were awarded," said Jones.

"A lot of our students were struggling in terms of their reading comprehension and taking a rigorous exam, and that has improved tremendously. Every single English classroom in my school has a library," she added.

Jones said that the award has only propelled her to work harder for the development of her students.