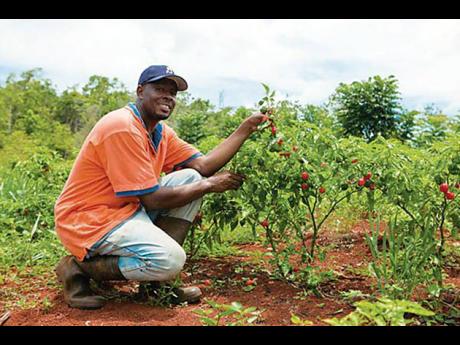 File
A small farmer getting his produce ready for Walkerwood.

Farmers who supply crops to local exporters can expect a greater level of scrutiny due to the implementation of more stringent regulations by foreign governments aimed at protecting their consumers.

With the introduction of the Food Safety Modernisation Act by the Barack Obama administration in 2011 and the establishment of a regional office by the US Food and Drug Administration (FDA), local manufacturers say that they are increasingly being required to provide more technical details about their products.

"The farmers would be required to show standard stuff like when they planted, what they treat it with, when they reap, down to when did they wash the vehicles that they delivered it in," noted group marketing director of Walkerswood Caribbean Foods Limited, Sean Garbut during a Gleaner Editors' Forum last Thursday.

Walkerswood manufactures seasonings, cooking sauces, preservatives, and canned vegetables, and exports almost 90 per cent of its products to markets in the US, Canada, the United Kingdom, and Garbut accepts that the new rules will force it to move from some of its traditional suppliers.

"Unfortunately, the small-farmer base, which we still rely very heavily on, is grass-roots people. They work very hard, but they don't know what a laptop is or how to keep detailed records outside of in a book, like myself," said Garbut.

He pointed out that because of the new regulations, the requirements for being a supplier to Walkerswood have increased.

"We used to have a lovely little lady that lives right in the town of Walkerswood by the square, and she had about 10 Scotch bonnet plants in her backyard. On Fridays, she would just pick what she had, take it to the factory and we cut her a cheque the next week and she get a few thousand dollars in her hand. That smaller scale is what is at the point of going away.

"That is not a batch size, so it can't be tracked, and if we are doing a mixed batch, it still comes back to traceability at some point," explained Garbut.

He argued that Jamaican small farmers can help to secure their livelihood by working together instead of in silos.

"We work very closely with our farmer base. We have a Walkerswood Community Farmers Co-Op that is right in the valley by the factory, so we are able to dialogue with them and with communities where they have a high concentration of farmers.

"What we have tried to institute with them is that they form their own cooperative and you assign a president or a leader who can handle this kind of bookwork and records keeping," said Garbut.

Deputy president of the Jamaica Manufacturers and Exporters Association and chief executive officer of Seprod Limited, Richard Pandohie, noted that in compliance with the regulations, all the details regarding production is required.

This includes the name of the fertiliser and insecticide used by the farmers who provide them with supplies.

"The truth is Jamaican agriculture has to move from a case where it is a backyard operation to a business. Farming can't be a hobby anymore, it has to be a business," Pandohie told Gleaner editors and reporters.