'We want more' - Byles rails against untapped opportunities in economy 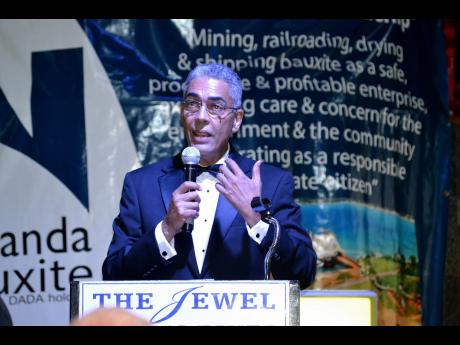 Chairman of the Sagicor Group Richard Byles is questioning why Jamaicans are not being targeted for better paying positions in jobs that are being created in several sectors of the economy.

Delivering the keynote address at Saturday night's St Ann Homecoming and Heritage Foundation's 13th Annual Awards Banquet at Jewel Dunn's River in St Ann, Byles acknowledged that over the past five years, economic progress has been made but stressed that much more needs to be done to set the country on firm economic footing.

Part of that requires that Jamaicans are considered for more than just unskilled and semi-skilled positions in developments taking place locally. This in turn requires a massive training initiative, he suggested.

"What is the point to have more hotels in Jamaica if Jamaicans can't themselves be the managers, be the entertainers, be the suppliers of the consumer goods used in the hotel?" Byles questioned, to huge applause from attendees.

But he said Jamaica must share the blame for this with the owners of the hotels.

Byles said Sagicor's hotel brand, Jewel, had Jamaican managers in all its hotels until the brand merged with Playa Group.

He also touched on the mining sector, asking, "What is the point of Alpart expanding if all we're going to do is supply the unskilled and semi-skilled labour?"

Continuing, he questioned the expansion of the business process outsourcing (BPO) sector in its current outlay, asking, "What is the point expanding the BPO business if we are just going to answer the telephone?"

Said Byles: "We want more than that. We want the BPO business where lawyers are given a part, where accountants are doing work, where paramedics are giving medical advice. We want to be in the high level BPO business."

The areas that Byles mentioned form a major part of the government's thrust for economic growth and, while commending the developments, he suggested more needs to be done to make Jamaica and Jamaicans better off.

"I make these points to say, part of the problem we face with economic development in this country is that the value added of the Jamaicans who work in Jamaica is too low. We need to have jobs that have greater value added and what that does is create a greater gross domestic product, it makes the individuals wealthy, it makes the domestic market bigger. So a big part of any economic development programme has to be a massive focus training programme that is going to look at every school leaver, every university leaver and make sure they have been trained and they are channelled into jobs that are part of the expansion and growth of the economy. But it won't happen if we just let it be."

The Sagicor Group chairman noted that over the past 20 years Jamaica's average annual rate of growth has been 0.5 per cent while the rest of the world has a rate that is eight time better, at 4.3 per cent.

"I think we can do better than that. What Jamaica needs is a development plan that will focus on closing down that gap. We need to develop an economic plan and put it front and centre in our attention and our focus."