80% of Jamaicans were infected with chik-V 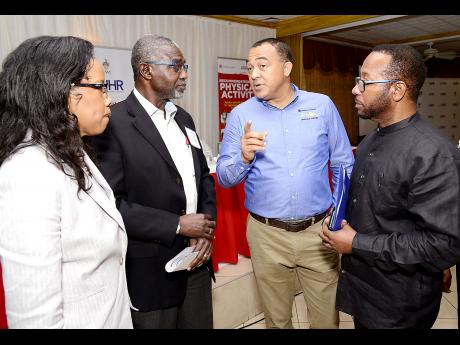 Yesterday, the Jamaica Health and Lifestyle Survey III confirmed the widely held speculation that more than half of Jamaicans were infected with the chikungunya virus (chik-V) when it swept across the island a few years ago.

Sharing findings from the survey, which was conducted during 2016-2017, Dr Karen Webster-Kerr, national epidemiologist at the health ministry, indicated that 80 per cent of Jamaicans were in fact infected with the mosquito-borne virus. She also noted that chik-V has remained in the island since it first hit in 2014.

"It must be taken into context that the blood was tested two to three years after the introduction of the virus. Almost half of persons in Jamaica said they had chikungunya. Of that (number), when we look at the case definition in terms of how many persons had fever and severe joint pains, only 24 per cent would have fit the case definition. However, when we did the test, eight out of 10 persons were infected with chickungunya," she said at a conference to announce the findings of the survey, which was held at the Mona Visitors' Lodge, St Andrew.

Webster-Kerr noted, however, that more investigation is needed in assessing some of the factors that would have contributed to prevalence in the different parishes. She shared that eastern parishes would have had the greatest numbers of self-reported cases, while Manchester and Westmoreland reported the lowest.

"A question that was asked was, 'Do you store water?' and three-quarter of Jamaicans said they stored water. Most persons will store water in drums and bottles," said the epidemiologist.

"We looked at whether or not water-storage practices had anything to with the prevalence of chikungunya, but that's not really the case because Kingston had the lowest water storage, but they had the greatest sero prevalence. This is something we have to investigate more."