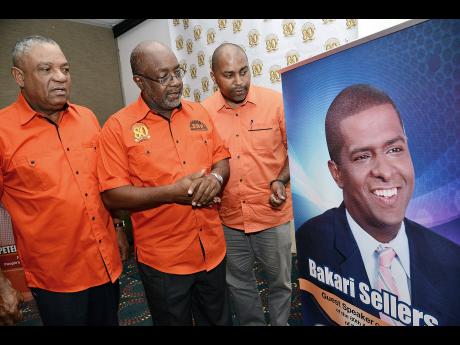 The People's National Party (PNP) will use its 80th annual general conference next weekend to outline its plans to take Jamaica forward if it is elected to form the next government.

PNP General Secretary Julian Robinson says that while the party has spent the past two years preparing for the eventuality of elections, it has been doing more than just opposing the actions of the Government.

"Our responsibility as an opposition is to hold the Government to account, and we will continue to do so because there is so much to hold them to account for. We also believe that we must articulate what we would do differently," Robinson told journalists yesterday at a media briefing to launch the conference.

He was supported by the PNP's chairman, Fitz Jackson, who declared that the party would use the weekend to outline its policy framework in the form of a covenant with the Jamaican people.

"It is not a manifesto. It will represent the broad outline of the policy objectives that the party will seek to achieve when it becomes the next government," said Jackson.

"This will be put forward at this time to also accommodate detailed discussion with delegates of the party and the wider Jamaican society. And we are doing so because the policy initiatives that we intend to take as the next government must have substantial ownership by the people."

Jackson declared that the PNP would emerge from the conference energised and ready to take over the reins of Government whenever the next general election is held.

"Our delegates and supporters will return to their communities with renewed enthusiasm to educate and organise their communities to ensure that a PNP Government is put in place after the next general election, whenever it is called," he said.

Under the theme 'The People's Interest: Our Passion, Our Purpose', the PNP will begin the conference next Thursday, September 13, with an opening-night celebration at the National Arena, where American political commentator, attorney-at-law Bakari Sellers will be the guest speaker.

On Friday, the party's delegates will meet in a closed session at the Jamaica Conference Centre before the highly anticipated vice-presidential election on Saturday at the National Arena, where six persons will vie for the four posts.

The conference closes on Sunday with the public session, also at the National Arena, where an address by PNP President, Opposition Leader Dr Peter Phillips will be the main highlight.