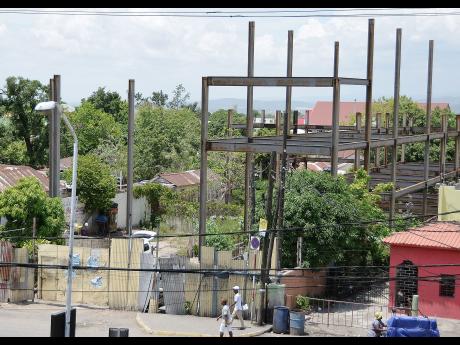 A developing property in Half-Way Tree, St Andrew, is providing a haven for drug pushers, a hideout for illegal taxi operators, a home for some squatters, and a dark, foul arena where women are sexually assaulted.

Sunday Gleaner sources say women walking by the property at nights are frequently harassed, with some females being dragged into an incomplete building construction on the premises and raped.

The danger posed by the criminals who loiter at the property has caused the operator of a nearby business to contract security guards to accompany its mainly female staff to the Half-Way Tree Transportation Centre in the evenings.

"One night I was walking towards Derrymore Road and a young lady was in front of me, with the headphones in her ears. Suddenly the gate opened and a boy just grabbed her. When she realised what was happening she screamed and ran straight into the road, and the boy ran after her," said John, a mechanic who operates in the area.

"There are several complaints like these, plus, I know of a case where a young woman was sexually assaulted," added John.

He said the property, which has its entrance at 15 Eastwood Park Road, can also be accessed from Molynes Road through a gully.

"Sometimes they rob people on buses and jump over the wall near the tyre shop on Molynes Road, run through the gully and come on to Eastwood Park Road through the big yard and vice versa," alleged John.

He said the Half-Way Tree police are aware of the property and the cover it provides for criminals as the cops have frequently accosted wrongdoers there.

This was confirmed by Superintendent Stephanie Lindsay of the Half-Way Tree police, who told The Sunday Gleaner that the cops are aware of the concerns of persons who have to pass the property on foot.

"The location is one the police monitor and we raid it on a regular basis. But we don't have any recent reports of rapes there," said Lindsay.

For years the property, across from the Pavilion Plaza, has had huge metal frames for a three-storey structure showing above the zinc fence around in.

Work on the building was stopped by the Kingston and St Andrew Municipal Corporation several years ago.

The National Land Agency lists the owner of the property as Leroy Lambie and Associates, with registered office at 167 Mountain View Avenue, Kingston 6.

But when The Sunday Gleaner visited that office, an employee said that, to the best of her knowledge, the property was disposed of some time ago. She said she would check and provide an update but that was not received up to yesterday.