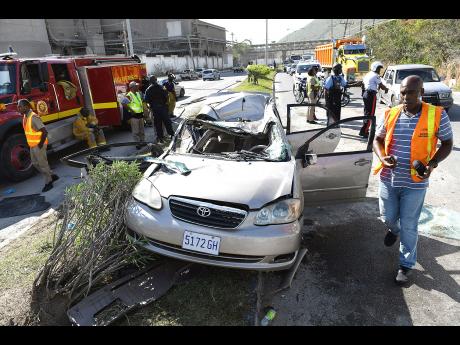 Ricardo Makyn
A Toyota Corolla motorcar driven by a woman which was involved in an accident with a Jamaica Urban Transit Company bus on the Sir Florizel Glasspole Highway adjacent to Caribbean Cement Company in St Andrew.

The number of persons killed on Jamaica's roadways since Sunday climbed to nine yesterday following a two-vehicle collision on the Sir Florizel Glasspole Highway in east Kingston.

One person died in the crash, which involved a Jamaica Urban Transit Company (JUTC) bus and a motor car, police sources revealed. Three persons were also injured in the crash and were being treated at hospital up to late yesterday.

According to an eyewitness, the motor car was travelling west along the highway when the female driver reportedly lost control of the vehicle in the vicinity of Caribbean Cement Company.

The eyewitness said the car crossed into the eastbound lane where it collided with the JUTC bus.

Three persons were reportedly trapped inside the badly damaged car and had to be assisted by firefighters, eyewitnesses reported.

The latest fatality pushed the number of persons killed in motor vehicle crashes this year to 243, according to figures compiled by the National Road Safety Council. There were 243 road deaths over the corresponding period last year.

On Sunday, three men were killed after a Toyota Corolla motor car crashed into a BMW motor car after the driver attempted to overtake a line of traffic along the Whitfield main road in Porus, Manchester.

On Monday, two men died after the car in which they were travelling crashed into a tree along Old Harbour Road in St Catherine.

The other road death reportedly occurred on Monday night.