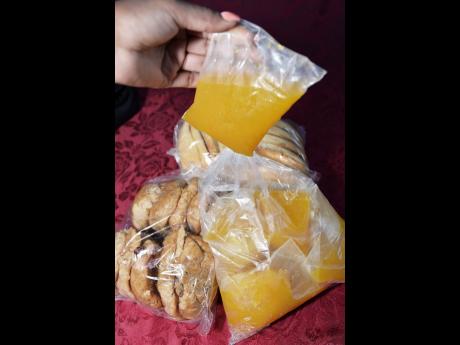 Ian Allen
Nutri bullas and bag juices are no longer being distributed by NPL in public schools.

Concerns are being raised in the education sector about few or no alternatives to bulla cakes and other high-sugar products following their withdrawal from public schools.

Education Minister Ruel Reid, while addressing the 54th Jamaica Teachers' Association's Annual Conference earlier this year, had announced that several food items, including the popular bulla cakes, would be removed from local schools as part of a campaign to promote healthier eating among students.

However, Fabian Mahabeer, principal of Mona Heights Primary School in St Andrew, made it clear that while he is not opposed to the withdrawal, it is equally critical that policymakers make a concerted effort to ensure that transitions are as smooth as possible and that an adequate number of products are available to serve every student.

"What I have seen so far is water and porridge mix. I think today when I checked, we got sandwich wraps. But we have over 200 students on the PATH (Programme for Advancement Through Health and Education) programme and we saw only 80 wraps, so you will find that each class could only get two. The same thing for the water, it comes in minimal supply because we got 100 bottles. When we checked the porridges, we got 60," Mahabeer said.

"Mind you, change and transition are good, but I would expect that the alternative would be as robust as the change. So if you are going to make it rapid and effective now, then it means that your alternative should be effective now, too. You shouldn't be scrambling to find alternatives," he continued.

Similar sentiments were shared by the principal of a downtown Kingston-based primary school who asked to remain anonymous. The principal told The Gleaner that nothing has been provided to the school since the start of the new academic year.

"What is the alternative? I would like to know," the principal said.

"I strongly believe that (bullas) shouldn't have been pulled so suddenly. Instead, they could have used the same products, but use less sugar. There were other products that they (ministry) used to send as well, such as the cornbread, cheese bread, sandwiches and porridge. We have got nothing of that sort since September and we have got no alternative."

The principal continued, "I don't know if eventually we will get something. The parents are also depending on it, but what can we do? What we are doing now is making sure that the PATH students are taken care of, in addition to some other students we have on a special welfare programme."

Reid, in response, said that the Government is leaving no stone unturned in making sure that the transition is smooth. He said where there are glitches, schools should make sure they contact their education officers.

"We are moving to feed only students on PATH with cooked meals and we have provided increased resources, paying canteen staff, upgraded canteens. This Government is moving to provide better solutions for schools without canteens, like wraps and sandwiches. Further, schools are to submit the list of PATH students before NPL supplies assigned schools, as PATH numbers need to be verified," Reid told The Gleaner yesterday.