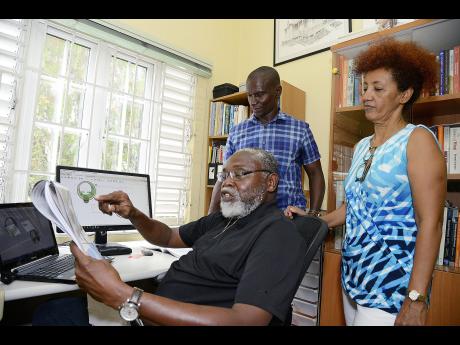 Ian Allen
GSA Architects is one of the finalists in the Houses of Parliament Design Competition. Team members are Emerson Hamilton (centre), Guenet Anderson (right), and Dwhite Batson. 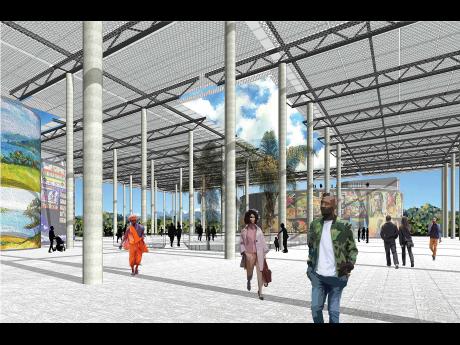 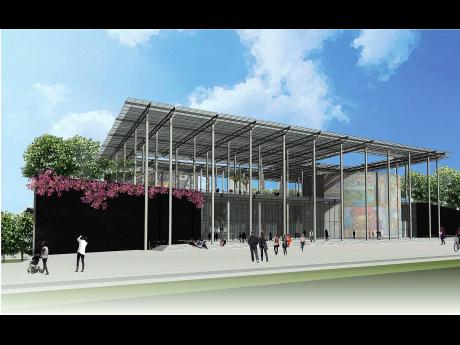 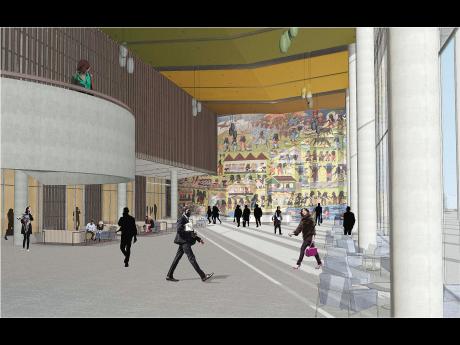 Over the next few days, The Gleaner will be publishing features on the five designers shortlisted for the new Parliament building to be constructed at National Heroes Park in Kingston. During the period, readers are invited to submit comments on the designs. Once all have been featured, readers are asked to vote for the one they think should be selected as the design for the new House of Representatives. Send your feedback on WhatsApp to 1-876-499-0169, email at editors@gleanerjm.com, or onlinefeedback@gleanerjm.com.

Guenet Sissaye Anderson, the lead designer for the firm GSA Architects, hopes that their concept drawings of what could become Jamaica's new Parliament building, to be constructed at the National Heroes Park in Kingston, not only meets the requirements of the Houses of Parliament Design Brief, but also captures within its raw outlay the intricacies that have helped forge a modern Jamaica with a powerful, futuristic outlook.

Their design shows a Parliament building steeped in symbolism and conceptualised with practical use, pulled together from painstakingly arduous research and hard work by its 13-member team, and which resulted ultimately in the submission of its conceptual design of what may become the country's next Parliament building.

Anderson told The Gleaner that the Parliament building must be designed and constructed to reflect the rich, diverse, and strong heritage of the people and their democratic ideals.

"Parliament for me is an assembly of the political community of the nation. It is the centre of our democracy. It is where the future of our country is decided. We architects can influence that process by designing a building that is inspiring and creative, one which our grandchildren will be proud of," Anderson told The Gleaner.

She said that the people of Jamaica deserve a community and a place of governance that can be shared by all, adding that this new seat of power and the law must be a place that is inviting, iconic, and where the Jamaican Government can conduct the people's business with transparency, efficiency, and safety.

"Our design was developed from a strong concept of the tropical verandah, which is a place of communal discourse," said Anderson.

Pulling the elements together

America-based Emerson Hamilton, a member of the GSA team of architects, was born a stone's throw away from the old Race Course, now National Heroes Park. He said that he feels a natural association with the area because of this and that it was a natural step to want to give back to Jamaica in this manner.

"It was something I could not have passed up. Creating our very first dedicated building for the purpose of holding Parliament is a massive thing, personally," he said.

Hamilton described the process as long and tedious but a worthwhile endeavour that encapsulates Jamaica's vision for development, prosperity, and enrichment.

"The first thing that we contemplated was pulling together a strong team that possesses the talent, skill, and patience to execute the design. There were endless streams of research done to get the right design, which, in the end, led to the concept we now have," he noted.

"We even sent questionnaires out to the people to tell us what they think the Parliament should be like. It was a really hard task, but we got it done, and now we are seriously at the edge of history."

Design - The National Verandah - A place of prominence

GSA Architects believes that within the coastal plain of Kingston, a small rise can dramatically alter one's perception. By submerging support elements of the parliament programme, it can elevate the ground plane, increase views, enhance hierarchy, and create both object and public space at the heart of the National Heroes Park.

"The proposed programme strongly advocates for a modern vision of public engagement with the Parliament building and the Jamaican Government. From roadside shack to the plantation, city home, or country retreat, the verandah is a symbol of shelter, of welcome, of gathering, and of family. It is the architecture of mediation and transmission. Its symbolic value and public functionality make it central to the Parliament's design," Hamilton noted.

He said that the new Parliament building must rise to meet the aspirations of the people and set a vision for Jamaica's future.

"It must be open and transparent, a place of gathering and celebration as much as debate and legislation. It should embody and enable the diversity of origin through the expression of every Jamaican and must be a symbol of our country's optimism and ambition," said Hamilton.

The two main chambers - the House of Representatives and the Senate - are different in orientation, as laid out by the designers, attracting the onlooker, and are sure to please members of the media, who often complain about the lack of adequate and appropriate space inside Gordon House, he said.

"The two parliamentary chambers are designed in a hybrid opposing bench/horseshoe layout. This maintains the current party separation of Gordon House but creates greater seating flexibility, efficiency, and closer proximity by adding a third bank of seating across from the dais. This third bank assigns with the party in Government," Hamilton explained.

The design also gives prominence to the lobby area, the porch, and the courtyard, along with its campus-style landscape.

Hamilton noted that the open-observation arrangement brings the media, diplomats, and public galleries closer to the debate floor for a more intimate feel of the proceedings.

"We feel that our design is a winning one. We attempted to add all the elements that were evident in the brief. The Parliament of Jamaica must be a sizeable departure from the usual, one that brings excitement and an iconic look, and we hope we have captured that," Hamilton said.