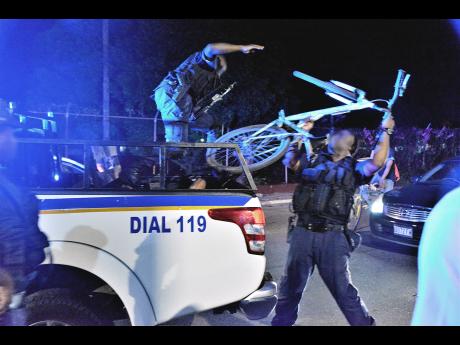 A policeman lifting the bicycle which Renardo Powell was riding when he was fatally shot on Marescaux Road last Thursday. The bicycle was later put back in the area where Powell fell after he was shot by the cops.

The Independent Commission of Investigations (INDECOM) has repeated its warning to members of the Jamaica Constabulary Force not to tamper with shooting scenes.

The police say Powell had been riding around on a bicycle in the Marescaux Road area, robbing persons while brandishing what was later discovered to be an imitation gun made from board.

He was fatally shot when he was accosted by members of a police party. Details on what led the cops to shoot him are yet to be released by the police.

But persons who have reported that they arrived on the scene shortly after the explosions were heard told The Sunday Gleaner that Powell was seen writhing in pain on the sidewalk as two policemen, one with a pistol, and another with an assault rifle stood over him.

They claimed it took minutes for the cops to load the injured man and the bicycle in the back of a service pickup and drove away.

According to the alleged eyewitnesses, while the cops were leaving the scene, they were stopped by a second group of cops who took the bicycle from the pickup and placed it back on the bloody spot where Powell had been lying, while their colleagues drove to the Kingston Public Hospital with the injured man.

Late last week, INDECOM's assistant commissioner, Hamish Campbell, declined to comment on its early investigation into Powell's death, but he underscored that tampering with crime scenes directly affects its investigations.

"Tampering with crime scenes will always be a problem and will impede effective investigations and the correct interpretation of events that occurred. This includes removal of the deceased, which is a common practice in Jamaica and not elsewhere," said Campbell.

"The collection of casings is still a frequent complaint from citizens who observe officers, post-shooting incidents, collecting them. The agreed JCF/INDECOM protocols are for the commission to be notified forthwith, and for the scene to be preserved until INDECOM arrives," added Campbell.

He agreed that in some instances, the police will have no choice but to preserve and protect valuables from loss or theft, but argued that such actions must be recorded and reported to INDECOM investigators.

So far this year, there have been 111 fatal police shootings, with 11 of those occurring last month.

INDECOM has reported that at least 92 members of the security forces are before the courts in connection with shooting incidents.