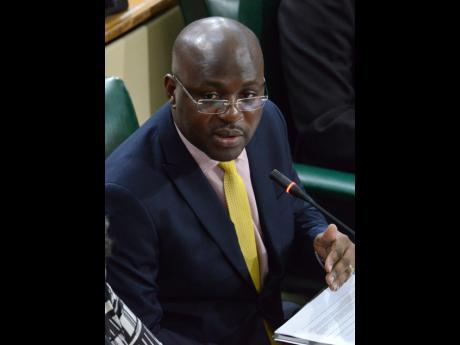 Former Minister of National Security Peter Bunting, on Wednesday, accused Chief Executive Officer (CEO) of the Firearms Licensing Authority (FLA) Shane Dalling of being the primary agent of discontent and dissent at the agency, citing the high turnover rate.

"It seems that you took a wrecking ball to the place. Forty-five persons left in 15 months out of a staff of 150. You either dismissed or didn't renew their contracts. You've replaced (them) with persons who didn't even meet the qualifications for the posts and persons who, quite frankly, are your cronies from former workplaces," Bunting charged during the sitting of the Internal and External Committee of Parliament.

Even though he apologised for using the word "cronies", replacing it with "persons who are manifestly unqualified for the job and personally known to Mr Dalling", the member

of Parliament for Central Manchester was unrelenting, accusing him of fostering a "toxic" environment in order to frustrate career officers into leaving. This, he further alleged, set the stage for the CEO to recruit friends to key positions.

Pulling from the report submitted to the committee by the FLA, Bunting cited the following case as a glaring example of nepotism by Dalling: "The senior audit and complaint officer, who was on secondment from the JCF - master's in business administration, Bachelor of Science in IT (information technology), a sergeant of police with a lot of investigative experience - and he is replaced by someone who appears to be a district constable with four CXC."

Dalling's explanation that some resignations were by persons taking up better-paying jobs did not appease Bunting, who kept up the pressure, triggering an appeal by Member of Parliament for South West St Elizabeth Floyd Green to committee chairman Fitz Jackson to rein in the former minister of national security.

"I am not sure if any evidence has been led that Mr Dalling is in charge of the employment process of the agency. So to make the connection between somebody being employed and Mr Dalling is dangerous," Green argued.

As Frank Witter and Green challenged Jackson to direct Bunting to rephrase the questions, the member of Parliament for Central Manchester got in this parting shot: "It's not his patty shop, but he is running it like his patty shop now," at which point Dalling appealed directly to the chairman.

"Mr Chairman, when I am invited here and when as public officers we enter this august body, we expect certain respect and decorum of the body," he stated.

Dalling was cut short by Bunting, who hollered: "Mr Dalling, you don't come here to lecture the chairman about doing his job. You come here to give an account. Just answer the question!"