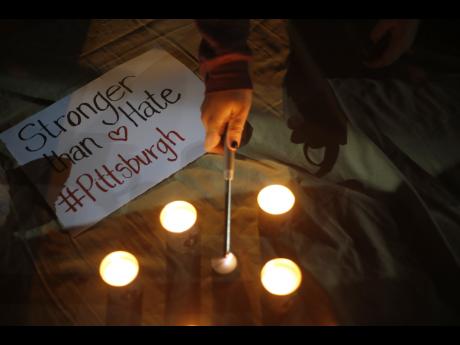 AP
People light candles in Tel Aviv, Israel, in a commemoration of the victims of a deadly shooting at a Pittsburgh synagogue,

Jamaica-based Rabbi Yaakov Raskin, in a letter to local Jews yesterday, said that he was "shocked and in disbelief, not just for the devastating loss of life, but for the basis of these senseless murders," as he responded to the Pittsburgh synagogue massacre in the United States on Saturday.

Robert Gregory Bowers killed eight men and three women inside the Tree of Life Synagogue during worship services before a tactical police team tracked him down and shot him.

Six people were injured in the attack, including four police officers.

With Jews around the world condemning the attack, the rabbi urged Jamaican Jews not to give in to panic, bitterness, or self-pity as he reminded them that Jewish people are a collective affirmation of life.

"Our existence and achievements are a living testimony to one of Judaism's greatest messages to humankind: the principled defeat of tragedy by the power of hope. Because that's what we Jews do."

"All through the ages, Jewish people have responded to their plight by permeating the darkness with the light of goodness and kindness. As we pause to consider the enormity of the tragedy and ponder the question, 'What can I do about it?' in the face of this darkness, look to illuminate the soul of another," he told his people.

"May the souls of those tragically taken be bound in the bond of eternal life. May God send comfort to those who mourn and healing to those injured. May we see an end to all devastation and a 'Shabbat world' filled with peace and harmony among all mankind," said the rabbi.