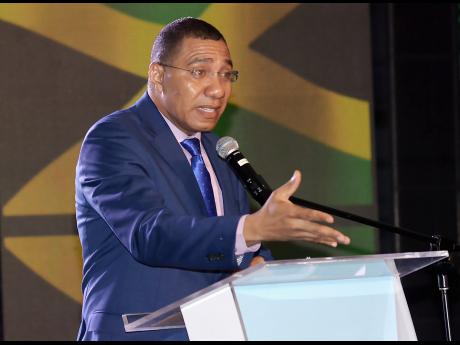 Prime Minister Andrew Holness has joined tourism minister Edmund Bartlett in expressing the view that the $17 million budget for the construction of a new 'Welcome to Montego Bay' sign, which has been generating much criticism, needs to be reviewed.

"Seventeen million dollars sounds a little high. From what I have seen, I think the minister (Bartlett) has done the right thing to ask for a review to make sure that what they plan to build is appropriate and is in keeping with the cost as advertised," said Holness, while speaking at Thursday night's town hall meeting in Montego Bay, St James.

"I don't think Jamaicans are saying the sign should not be rebuilt. We want to make the sign iconic so when tourists come in, we want them to stop and take 'selfies' by the sign. As much as you might believe that that's a waste of money, when that sign is circulated all over the world, you can't pay for that advertising."

Earlier this week, Bartlett ordered a review of the costs associated with the construction of the new sign, which is to replace the previous 'Welcome to Montego Bay' sign, which was destroyed in March by a vehicle that got out of control and crashed into it.

The construction of the new sign, which is currently under way, at the entrance to the Sangster International Airport, has attracted much criticism from several stakeholders, who believe that the projected cost of $17 million, which will include illuminated letters, site landscaping, and the installation of several safety features along the nearby roadway, is far too expensive.

Holness also wants more focus to be placed on linking tourism with other sectors to include agriculture as well as to see a strengthening of the local craft industry.

"I'm appealing to business people to start making investments in the linkages, particularly in agriculture, so that more of the revenues earned from our sun, sea, and sand can come back here to Jamaica and benefit the people of Jamaica," said Holness.

"I also believe there's great potential in our local art and craft, and we haven't made enough effort to market it. I'm going to give greater consideration to how we can support and assist our craft vendors to make it a viable economic enterprise."