Theresa May wins no-confidence vote by MPs unhappy over Brexit 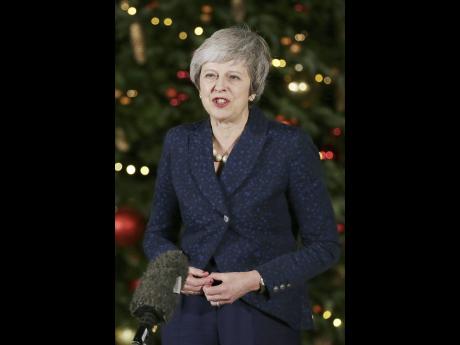 British Prime Minister Theresa May survived a political crisis over her Brexit deal yesterday, winning a no-confidence vote by Conservative lawmakers that would have ended her leadership of party and country.

But the margin of victory - 200 votes to 117 - leaves May a weakened leader who has lost the support of a big chunk of her party over her handling of Britain's exit from the European Union. It also came at a steep price as she promised not to run for re-election in 2022.

Britain's Brexit problem, meanwhile, remains unsolved as May seeks changes to her EU divorce deal in order to make it more palatable to Parliament.

May said she was "pleased to have received the backing of my colleagues" but acknowledged that "a significant number" had voted against her in yesterday evening's secret ballot.

"I have listened to what they said," May promised as she stood in a darkened Downing Street after what she called a "long and challenging day".

The threat to May had been building as pro-Brexit Conservative lawmakers grew increasingly frustrated with the prime minister's handling of Brexit. Many supporters of Brexit say May's deal, a compromise that retains close economic ties with the EU, fails to deliver on the clean break with the bloc that they want.

The balloting came after May's Conservative opponents, who circled the beleaguered prime minister for weeks hoping to spark a no-confidence vote, finally got the numbers they needed to call one.

The vote was triggered when at least 48 lawmakers - 15 per cent of Conservative legislators - wrote letters asking for a no-confidence ballot.

On Monday, May postponed a vote to approve the divorce deal to avoid all-but-certain defeat. She has until January 21 to bring it back to Parliament after - she hopes - winning concessions from the EU.

The result of the vote was announced to loud cheers from lawmakers gathered in a stuffy, ornately wallpapered room in the House of Commons. Under party rules, May cannot be challenged again by fellow Conservatives for a year.