Church rubbishes talks that they are only vocal on gay issues 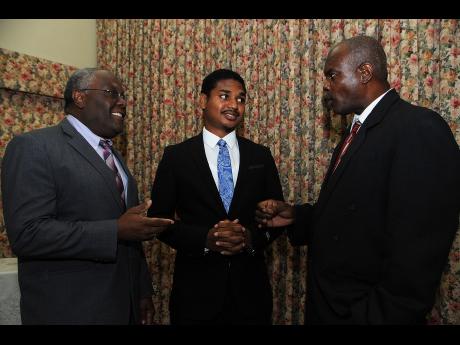 Lionel Rookwood
From left: Wayne West, chairman of the Jamaica Coalition for a Healthy Society, speaks with Daniel Thomas of the Love March Movement and Alvin Bailey, bishop and chairman of Jamaica CAUSE, during a press conference to commemorate the 70th anniversary of the Universal Declaration of Human Rights at Family Life Ministries on Monday.

Bishop Alvin Bailey, chairman of Jamaica CAUSE, told The Gleaner that a clear strategy of the lesbians, gay, bisexual, and transgender (LGBT) community to undermine the push to promote faith and healthy families is the constant assertion that the Church is only vocal on homosexual issues.

"The Church has long been against any kind of law and practice that causes abuse of our women, the abuse of our children, and the general crime and violence against humanity."

Bailey was speaking following a press conference to commemorate the 70th anniversary of the Universal Declaration of Human Rights on Monday. In addition to recognising the anniversary, the church group wanted to express its concerns about what it describes as the rise in fake rights and the threat to the Caribbean family.

Bailey said that the Church would continue to monitor developments, both from the perspective of policymakers and the LGBT community. He also said that he would not back down from defending the tenets of faith, decency, and morality.

"Adultery in itself stops at adultery, but if adulterers should seek to lobby for polygamy to be legalised, then we are against it just the same. So any entity within our society that comes together and decides to impact policies, programmes, and the values of our society contrary to our Christian values, we are going to be taking a firm stance against it," he said.

Dr Daniel Thomas, president of the Love March Movement, pointed to a number of incidents where homosexual content was easily accessible to children. As a result, he said the youth of Jamaica and the Caribbean would be taking a firm stance on making sure that children are protected from any practice that is contrary to faith and healthy families.