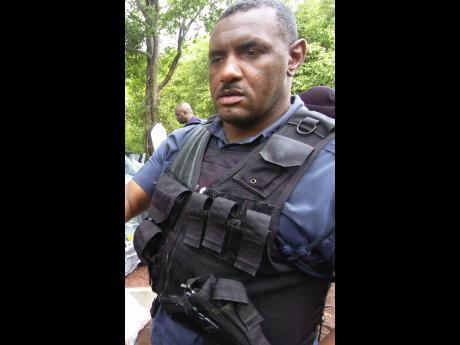 Senior Superintendent of Police Anthony Castelle, who collapsed in court three weeks ago when he was found guilty for shooting a pregnant woman in Montego Bay, escaped a prison term but was fined $1 million when he appeared in the St James Parish Court for sentencing yesterday.

The solidly built Castelle appeared composed as he entered the courtroom, and he kept his calm during the summation and sentencing by presiding magistrate Natalie Hart-Hines, who handled the case against him.

"Sentencing should be proportionate to the gravity of the offence, and it should not be unduly harsh or unduly lenient," said Hart-Hines in her pre-sentencing statement. "Having considered the offence, the circumstances of the offender, and the social enquiry report, I'm satisfied that this is not an appropriate matter for a custodial sentence, and I believe the appropriate sentence is a fine."

However, while her client escaped a custodial sentence, attorney-at-law Althea Grant, who represented Castelle, said that the matter would be appealed and noted that a submission had already been made to put that process in motion.

"We will be appealing, and an oral notice was given to that effect. I don't want to say too much on it to rile up the matter because it is pending," Grant told The Gleaner in a brief statement following the sentencing.

Despite being seemingly lenient to Castelle, Hart-Hines, nonetheless, chided him for his poor decision-making with regard to the incident in which Janice Hines, who was in the first trimester of her pregnancy, was shot as she sat in the back of a taxi, which a police patrol chased and fired on.

"The rule of law must apply to everyone, and the police must not only enforce the law, but follow it as well," said Hart-Hines. "The circumstance you find yourself in is very unfortunate since you're expected to be an example to the junior officers who come to you and to the community as well."

Castelle was arrested and charged by the Independent Commission of Investigations on May 18, 2016, following the shooting incident, which took place on January 22, 2016. District Constable Rohan McIntosh, who was charged alongside the senior policeman, was freed on a no-case submission on November 9.