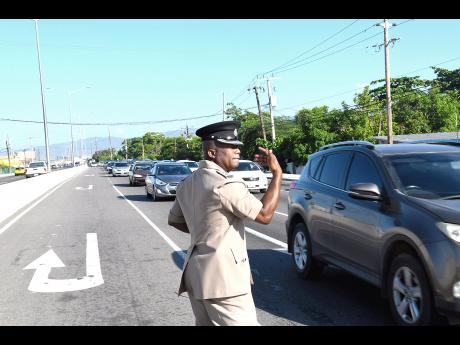 Senior Superintendent of Police Calvin Allen is assuring motorists that they can expect reasonable traffic flow, despite the expected challenges that come with the Christmas season.

In an interview with The Gleaner yesterday, Allen, who is the head of the Public Safety and Traffic Enforcement Branch (PSTEB) of the Jamaica Constabulary Force (JCF), said that police personnel from his and other divisions have been dispatched to intersections and roadways across the Corporate Area to facilitate the steady flow of traffic.

"Intersection management is a critical part of our strategy in terms of policing the Yuletide season, while we ensure that we have that number of police personnel in our public spaces such as the town squares and the plazas, all geared towards ensuring our citizens can go about with far greater freedom and ease, feeling confident that their safety is intact," Allen assured.

But the senior cop pointed out that although it is the duty of the police to serve and protect, citizens must also look out for their own safety.

"I want to use the opportunity to remind our various publics to be alert, taking safety into your own hands, not going to ATMs that are in lonely areas in the night. Don't wait until you come out of the bank to be counting your cash. Do not leave valuable stuff on the front seat of your vehicle where it is easily seen and becomes an attraction for those with ill intentions," Allen said.

The senior superintendent has also suggested carpooling as a way of minimising traffic.