Bakers not alarmed at US$1,000 price tag for Petrojam cake 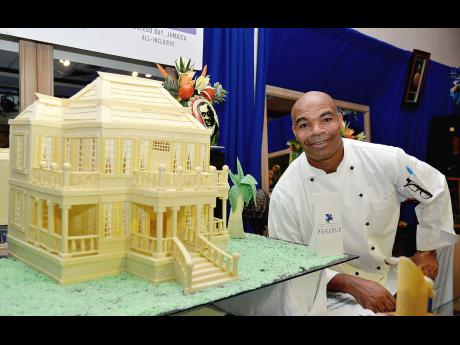 Kenyon Hemans
Chef Lincoln Peterkin poses beside his masterpiece – a miniature model of Devon House that was done from white chocolate at the JCDC Culinary Festival earlier this year.

At least two experts in the baking sector were not alarmed at the US$1,000 price tag for a four-tiered topsy turvy chocolate cake that was unveiled at a 'surprise party' for then energy minister Dr Andrew Wheatley.

Venise Cargill, a seasoned teacher of baking and decorating and a cake supplier, said that there was nothing unusual about the price of such a cake.

"They (critics) are overreacting. I would have to see the design of the cake to be able to give an exact pricing on it, but that price would not be exorbitant. Clearly, those persons who are talking don't have any idea about what goes into making a topsy turvy cake," Cargill told The Gleaner.

"I would have to see that cake to be able to speak to it specifically, but in general, if we are speaking about a fondant-covered cake, for example, for me, those kinds of cake start from $25,000, and that's an average size, which does not include decoration. It depends on what goes on the cake as decoration, but each time you put decoration on the cake, that could add to the cost," she continued.

"If I'm doing a four-tiered fruit-cake, I'm looking at $130,000 -$140,000. You can get cheaper cakes, but the quality might not be there, but if you want something with quality, it would be in that price range," said the chef, who has been in the business for some 30 years.

Last Friday, Government Senator Don Wehby charged that all Petrojam funds "that were used for personal benefit" should be repaid.

"Including those used for the former minister's birthday party and birthday cake," Wehby declared as he made his contribution to the State of the Nation Debate in the Senate.