Wedderburn out - BSJ to get new executive director 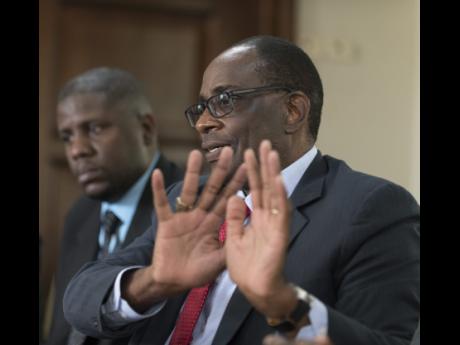 Chairman of the board of directors of the Bureau of Standards Jamaica (BSJ), Government Senator Matthew Samuda, has confirmed reports that Stephen Wedderburn is to be replaced as its executive director.

Wedderburn's contract comes to an end on December 31 and Samuda said the board opened up the process by requesting applications.

"Mr Wedderburn was among those who applied, and he was shortlisted with other applicants. They were interviewed by a panel, which included members of the board and the acting permanent secretary in the ministry," said Samuda.

"At the end of the process, we decided on another candidate, but I cannot say more on that at this time," added Samuda.

He said that long-time BSJ executive Dr Dwight Ramdon, who is the director, science and technology, at the Bureau, has been appointed to act as the executive director until the preferred choice is installed.

Samuda and other members of the BSJ board met with the staff early yesterday to inform them of the pending change.

"I want to put on record my appreciation for the work of Mr Wedderburn at the BSJ over the period that he served," said Samuda.

Wedderburn, who, two weeks ago, led a BSJ team to a Gleaner Editors' Forum, yesterday declined to comment on the development.