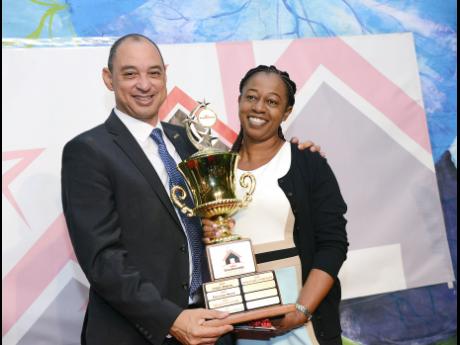 When Rosemarie Forrester departed her home parish of Manchester in August 1994 to take up a housekeeping job with a Kingston-based family, the then 23-year-old set one solitary goal: to give her two young children the opportunity of a good education.

While the journey to this current juncture in her life has been "far from easy", Forrester, the recent recipient of the Female Household Worker of the Year Award, never once thought her goal unattainable in her line of work and made the necessary sacrifices that allowed her children to earn university degrees.

"The pay was not much, and they (children) did not have the Reebok and the brand-name things, but I always made sure they had lunch money, bus fare, and stuff for school," Forrester told The Gleaner, saying that unfavourable circumstances did not permit her to sit her Caribbean Secondary Education Certificate exams.

Forrester's move to Kingston would see her daughter and son initially living apart, with the former attending Bishop Gibson High School for Girls and the latter enrolling at Knox College.

"Any and everything for me was out of the picture. It was all about them. No new nothing for me, they were the focus," she stressed.

"I needed to ensure that they had more options than me once they got older, so as soon as I got their book lists, I would buy the books one by one, and, thankfully, the family I work for are also like family to me, so I would get some of the books from the daughter who was older than my children," she added

Her daughter would matriculate to The University of the West Indies to pursue studies in the area of psychology and criminology while her son moved on to the University of Technology to major in general management.

Both performed well and have since secured meaningful employment in the private sector, and it is this accomplishment that Forrester ranks atop any other.

"While I was honoured and proud of myself to win such an award, knowing that I've really made a career out of housekeeping, nothing tops being able to help my children through college. It was so difficult at different points - the finances for so many aspects of college life. I remember for a period, one of their rent would always be late because I had to pay one this week and the other when I get paid the following week. My children and others also helped in any way they could, so I won't take all the credit, but I'm just happy with the decision I made decades ago," she said.

Forrester encouraged others to approach their jobs with the utmost vigour and seriousness regardless of the title.

"It may not be riches, but it has seen me through and has achieved my life goal of equipping my kids with a proper education. So always remember that it is not just doctors or lawyers that have careers. We (domestic workers, handymen, maids) can make careers, too," she said.

It is presented in the name of the late Dr Heather Little-White in recognition of her years of service at GraceKennedy, her training of household workers, and her dedication to the improvement of their skills and their lives.