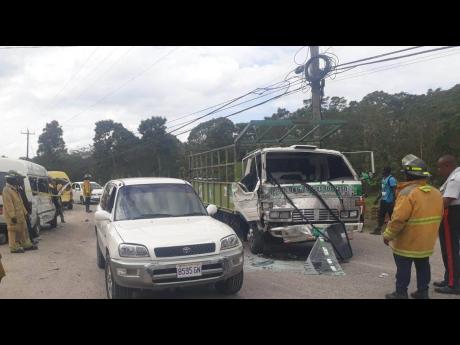 Contributed
Yesterday’s crash along the Montpelier main road in St James resulted in several persons being injured, five critically. The accident caused gridlock on the busy thoroughfare, which is the primary link between Montego Bay and southern towns such as Cambridge, Black River and Savanna-la-Mar.

The accident ­– which occurred about 8 a.m. close to the Blue Hole intersection, 21 kilometres south of Montego Bay – saw more than 30 people being rushed to Cornwall Regional Hospital (CRH) in the St James capital. Eleven persons were taken to the trauma unit, which was initially overwhelmed.

“The critically injured persons were immediately sent off to get CT scans,” he said. “The injuries of the rest of the patients were basically injuries to their limbs and heads. Those others were triaged [to be assessed] for X-rays, and they will probably be able to go home,” added Harvey.

According to reports from the Anchovy police, the accident occurred when the driver of a white Toyota Hiace minibus, which was transporting passengers from Savanna-la-Mar to Montego Bay, stopped to allow an Isuzu truck to turn on to the Blue Hole roadway.

While the truck was turning, another minibus, which was also transporting passengers from the direction of Savanna-la-Mar, attempted to overtake the Toyota Hiace bus and collided with the truck. The impact sent that bus crashing into Toyota Hiace bus.

“When mi hear di crash, mi swear say everybody dead,” said a man who ran from his yard to assist the injured after hearing the collision. “Mi run go out deh and mi see di three vehicle dem mash-up and everybody inna blood. We help pull dem out and send off di worst one dem to hospital.”

The three drivers, who suffered minor injuries, were questioned by police officers who rushed to the scene.