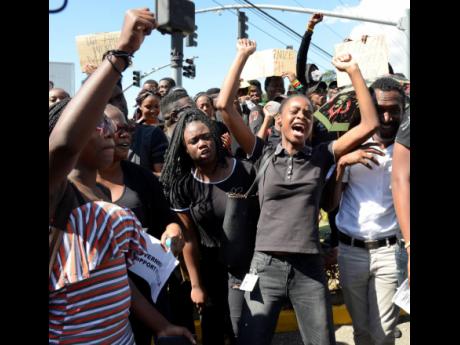 Ian Allen
UTech students and teachers demonstrate outside the gates of the University of Technology, Jamaica campus in Papine, eastern St Andrew, on Wednesday morning.

The Jamaican Government has come under scathing criticism from student and staff lobbyists of the University of Technology (UTech) who have condemned being treated as poorer cousins to the neighbouring University of the West Indies (UWI), Mona.

Correspondence was yesterday delivered to the Office of the Prime Minister and the Ministry of Education with concerns over a wide disparity between the subventions the Government offers both universities.

Tensions rose at UTech’s Papine campus as boisterous staff and student protesters made their voices heard yesterday, and Tia Ferguson, president of the UTech Students’ Union, says that her membership will turn up the heat if remedial action is not taken. The demonstrators railed against what has been described as chronic underfunding when compared to other tertiary institutions in Jamaica.

Ferguson said that the fiery fury of the protesters was lit by the revelation that The UWI would get an additional subvention payment in the current financial year. The subvention is the grant given by the Government to assist schools with operational costs.

“We were protesting the subvention, the money that’s given to the university to provide the resources and pay, some of which will be tuition fees. We learnt recently that an additional $11.4 billion was available, and so the Government is giving our counterparts (UWI) approximately $963 million, basically, another billion,” she told The Gleaner.

For the 2018-2019 fiscal year, The UWI received $8.73 billion in subventions while UTech received less than a quarter of that amount, $1.87 billion. In the second Supplementary Estimates tabled in the House of Representatives in January, The UWI was given an additional $963 million.

UTech also received significantly less in the 2016-2017 financial year at $2.1 billion while The UWI received $7.2 billion.

Members of the UTech Academic Staff Union were yesterday called to attend an urgent meeting with the finance and education ministries to discuss the subvention as well as salary increases that union members say they were promised at the start of the academic year. Attempts to get an update on the negotiations from both the finance and education ministries were unsuccessful.

Earlier yesterday, protesters clad in black braved the mid-morning sun as they used placards and sang choruses to register their disgust. “Justice for UTech”, “More Government support”, “UTech deserves more”, and “#BLACKOUT” were some of the popular refrains.

“UTech, Jamaica, per-capita subvention from the Government is lower than that of teachers’ colleges, the College of Agriculture, Science and Education, Edna Manley College of the Visual and Performing Arts, community colleges and most secondary schools.

Having ignored pleas from president of UTech Professor Stephen Vasciannie to be patient and not protest, student groups and unions caused classes to be eventually suspended for the day. Some of those who attempted to commence class activities were interrupted by a howling posse shouting “we want justice!”

One of the protesters, who spoke with The Gleaner during yesterday’s protest, jumped on the Prime Minister Andrew Holness’ pre-election buzzword ‘prosperity’.

“I know my prime minister. I know that he and the Ministry of Education can find some room and bring some prosperity over here. We not asking for much, but if you want world-class education and world-class results, you have to sprinkle prosperity and make the fruits grow,” the animated protester, who did not want to be named, said.

Acting Permanent Secretary Dr Grace McLean advised that in the wake of a meeting last Friday, a verification audit of posts at UTech commenced yesterday and that the relevant documentation was being prepared for submission to the Cabinet.