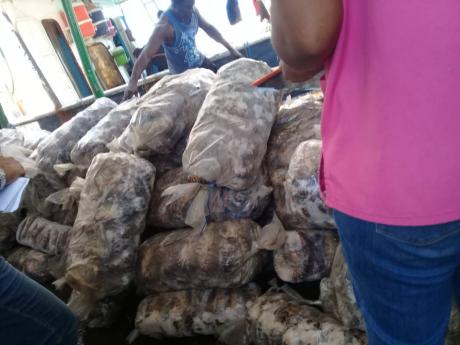 Contributed
Staff of the Fisheries Division sort through the 55,000 pounds of conch, crab, fish and lobster yesterday. The catch was seized from poachers on Saturday. Contributed

A whopping 55,769.2 pounds of assorted seafood catch is the overall take poachers had stocked on board the two Dominican Republican industrial fishing boats intercepted by the Jamaica Defence Force Coast Guard off the Pedro Banks on Saturday.

After three days of sorting, counting, measuring, and weighing by staff of the Fisheries Division in the Ministry of Industry, Commerce, Agriculture and Fisheries, the final tally is:

Director of Fisheries Andre Kong described the catch as “small compared to what these guys usually have in their possession when we catch them”, and theorises that the poachers “had just come on to the banks” and had not been fishing for long when the Coast Guard intercepted them on Saturday morning. It was about 8:10 when the poachers were seen by the crew of the HMJS Middlesex, which was patrolling the area.

Kong expressed appreciation to the Coast Guard for its quick action in apprehending the poachers and securing the catch.

Meanwhile, prosecution proceedings against the 57 Dominicans gets under way in earnest today.

The local industry is projected to suffer significant fallout from the closed season on the harvesting of queen conch, which went into effect on March 1 and runs until January 31, 2020.