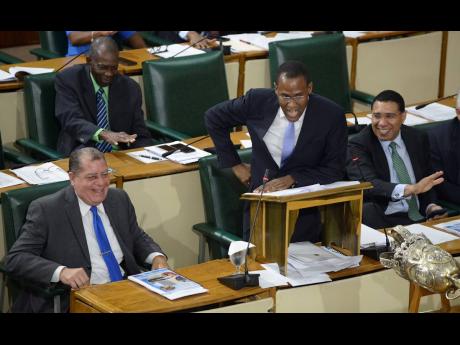 Shorn Hector
An animated Nigel Clarke addresses the House of Representatives during his maiden Budget Debate presentation on Thursday.

A $14-billion stimulus package is the centrepiece of the Government’s 2019-2020 Budget.

As of April 1, a total of 3,500 businesses will no longer have to file returns on general consumption tax. The reporting threshold has been increased to $10 million, up from $3 million. Government will be giving up an estimated $731 million. The ad valorem (tax related to value) stamp duty payable on loans and other securities under the Stamp Duty Act will now attract a flat fee of $5,000 per document. Government will give up $6.65 billion in revenue. The transfer tax rate on the sale of property will be cut from five per cent to two per cent, slicing $3.431 billion in tax revenue.

The transfer tax threshold on the estate of deceased persons will move from $100,000 to $10 million. Government will give up $287 million with this measure.

The minimum business tax of $60,000 has been abolished as well as the $100,000 asset tax on non-financial institutions.

Reacting to the announcement, president of the Jamaica Employers’ Federation, David Wan, said the cuts should boost economic growth, noting that the package was being funded from a reduction in the primary surplus (the difference left after accounting for total revenue and day-to-day expenses, excluding debt payments), and revenue overperformance.

President of the Small Business Association of Jamaica, Hugh Johnson, welcomed Clarke’s announcements. Johnson said his sector had lobbied long and hard, and he believes that the reforms are a step in the right direction.

“We’ve been asking for this from time immemorial, and it is just coming. When you have people in Gordon House who understand business, this is what we expect,” he said, adding that it was a welcome stimulus.

The finance minister lamented that since 2001, successive governments have levied a total of $130 billion of net new taxes, while the country’s growth rate of total goods and services produced in this period moved by an annual average of 0.5 per cent. Clarke also noted that $90 billion in net new taxes over the last 10 years had yielded a GDP growth rate of 0.2 per cent. He told the House of Representatives that increased taxes act as a disincentve to positive economic performance.

“Mr Speaker, we know that taxes punish growth, so for decades, we have patched up the tax system with a slew of tax incentives, which we hope would have spurred growth, but that has failed,” Clarke said.

The finance minister said that for the last three consecutive years, revenues have overperformed by an average of 0.8 per cent of GDP per year. He also drew a connection between tax relief and improved economic performance. Clarke said that now was the ideal time to stimulate the economy using tax relief.

“After almost 20 years of consistent tax increases and no new taxes last year, it is now time to give back. It is the right thing to do.

“We still have the challenge of high debt and growth below what we want. Therefore, we have to give back in a way that is calibrated to have a stimulative impact on growth,” Clarke said, adding that the first priority was to phase out taxes that were most distortionary to economic activity.