Scammers use WhatsApp hoax to lure recruits to Up Park Camp 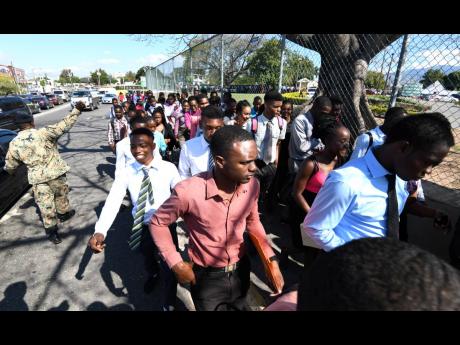 Ricardo Makyn
Young men and women make their way to Up Park Camp on South Camp Road yesterday. A social-media post misled thousands yesterday who turned up at the army’s headquarters in response to a message about a recruitment drive. A JDF spokesperson said the post was a hoax.

An apparent scam forced the Jamaica Defence Force (JDF) yesterday to accommodate the registration of thousands of young people from across the island who responded to a WhatsApp hoax that was being circulated.

Daily, the JDF invites 80 to 120 persons who sign up via the jointhejdf.com website to come in and go through a recruitment process. But yesterday, more than 2,000 young men and women turned up at Up Park Camp, well groomed, but uninvited, claiming to have received the notification via WhatsApp.

According to JDF’s Civil Military Cooperation and Media Affairs Officer Major Basil Jarrett, the message was more than likely sent out by scammers trying to cover their tracks after collecting thousands of dollars from persons who they promised spots in the army.

He revealed that the development was not the first of its kind, but the first where so many persons showed up. He said also that individuals have been arrested in the past for similar scamming activities but gave assurance that rigorous investigations were being done.

“Some came from as far as Westmoreland. We still went ahead and registered everybody so they can be in our system, although that’s not the regular process. We didn’t want to waste their time. There was a social media posting, which I must say is fake news. Some of them have paid unscrupulous persons from $15,000 to $30,000, to get in the JDF. Persons have been meeting with scammers.

“All of this seems to have started online. We’ve had this problem before, just not on this scale, with the use of social media and the giving of a date and time. There is no cost to joining the JDF, and if anyone offers you a spot for a fee, that is a red flag. That fake post is part of a plan to make their scamming look legitimate. We are cautioning persons not to engage.”

Janelle Rowe borrowed money from her neighbour to make the trek from Thornton in St Elizabeth. She said she was aware of the recruiting procedure but somehow got conned.

“I knew I was to apply online, but because I am a part of my community club and we have a WhatsApp group, each time there is a job offer, they send it in the group. I always wanted to be a soldier, so I came. It would have been inconvenient if I was turned back because I left St Elizabeth from 3:30 a.m. to get here.”

Broadcasting Commission of Jamaica Chairman Anthony Clayton recently highlighted the harm an unregulated social media environment poses to Jamaicans, including the proliferation of fake news. The commission is lobbying the Government to formulate necessary legislation.