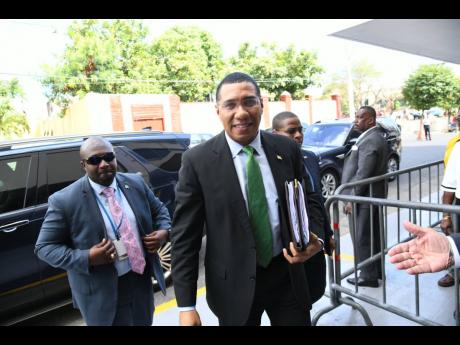 Pointing out that Jamaican politics is still characterised by leader-centric influence, political commentator Dr Paul Ashley believes that there is no surprise to RJRGLEANER-Don Anderson poll findings that the ruling Jamaica Labour Party (JLP) would hand the opposition People’s National Party (PNP) a sound defeat if a general election were to be called today.

The poll, which surveyed 1,003 voters islandwide between February 15 and March 3, revealed that there is an 11-percentage-point gap between the two parties.

Eighteen per cent of voters indicated that they would line up behind the PNP ‘s banner if an election were called today, while 29 per cent say they would march with the Andrew Holness-led Jamaica Labour Party (JLP). Fifty-three per cent are undecided as to where they would put their ‘X’ at this time.

The latest results represent a four-percentage-point widening of the gap between the country’s two major political parties since last year. In 2018, nineteen per cent of voters indicated they would cast their ballot for the PNP while 26 per cent said they would back the JLP.

“It is being said that the PNP is in need of a resurrection. However, the most celebrated resurrection was preceded by a crucifixion. Therefore, there may have to be a crucifixion before a resurrection, and that is why Good Friday comes before Easter Monday,” Ashley quipped as he sought to explain why the PNP would need to shuffle the deck.

He further noted that although earlier poll results showed that Phillips has managed to reduce his negative perception from 60 per cent (2018) to 51 per cent (2019), this is not being translated to positives for either him or the PNP.

Human-rights activist and public affairs commentator Jaevion Nelson also said that the poll results were not surprising, arguing that the PNP’s political strategy has been weak while the JLP has managed to impress the populace despite a number of major corruption allegations.

“It is not surprising that the JLP has gone up by three notches despite a number of alleged corruption scandals. I think a number of people are still very much pleased with their performance,” Nelson said.

Turning to the PNP, Nelson argued that all was not lost for the party and its leader, but there was need for a change of strategy.

“The political strategy has to be a cocktail. If all the time you speak, and the people who you speak to are those who already support you, then you are not necessarily doing any kind of work to get new supporters,” Nelson said.

But Ashley pointed out that Phillips has not had a show of good political optics since taking over the PNP presidency from Portia Simpson Miller and was in danger of being sent to the political graveyard with an unenviable political tag.

“Even though Peter Phillips has paid his political dues, probably has remained credible and avoided scandals, there is a clear and present danger that he will become the first PNP president not to be head of government. That’s a historical record that Peter Phillips will not want to claim at all,” Ashley said.