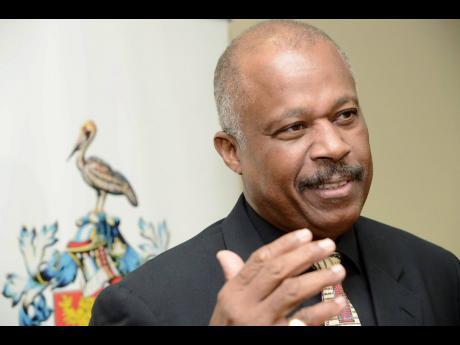 St Lucia Public Service Minister Dr Ubaldus Raymond has been sent on leave as the government launches an investigation “into recent information being circulated in the public domain”.

A statemet issued by the Office of the Attorney General promised that “at conclusion of these investigations, the outcome will be presented to the general public”.’

Earlier this week, Prime Minister Allen Chastanet denied reports that Raymond had tendered his resignation amid media reports that the minister was at the centre of a salacious conversation that had gone viral on social media last weekend.

The media had reported that Raymond had tendered his resignation following the release of a telephone recording on social media between a male and a woman with a foreign accent.

In the statement, the Office of the Attorney General said that “as a consequence of this initial probe, more information has come to light which warrants further investigations by the relevant authorities”.

The vice chancellor of the University of the West Indies (UWI), Sir Hilary Beckles, has held talks with the Antigua and Barbuda government regarding the opening of the fourth landed campus of the regional tertiary institution.

Government says that the Five Islands Campus should be opened in September with at least 1,000 students and according Cabinet invited Harris to announce the pending decision of the Accreditation Council.

“The Fourth Landed Campus of the University of the West Indies—the Five Islands Campus—is to be approved when the Council next meets in two weeks. The amount required annually, the Council will determine, is likely to be met by the Antigua and Barbuda authorities; the infrastructure is also in place to meet the tailored financial capabilities,” a Cabinet statement said.

Information Minister Melford Nicholas told reporters that Antigua and Barbuda is better prepared for the launch of its campus than had been the case when the campuses were launched in Barbados and Jamaica more than 53 years ago.

The Trinidad and Tobago government yesterday described as “uninformed, mischievous, inaccurate, unprofessional and totally untrue” media reports that the country’s dollar would be devalued by the end of 2019.

Finance Minister Colm Imbert said that the Guardian Media stories on its television service and in its daily newspaper were “uninformed and speculative”.

In a statement, Imbert said that the media houses had “falsely claimed that Fitch Ratings, a credit rating agency contracted by the Government of the Republic of Trinidad and Tobago, has stated that the Central Bank will devalue the Trinidad and Tobago dollar by the end of 2019”.

The new permanent representative of Venezuela to the Organization of American States (OAS), Gustavo Tarre, has presented his credentials to the Secretary General, Luis Almagro, who has promised to work with him “to deepen the path to democratization, peace and justice for Venezuela”.

Almagro said that earlier this week, the “voices in favour of democracy in the hemisphere” voted for the resolution that accepted Tarre’s appointment.

CARICOM countries, with 14 votes in the OAS, were divided on the issue with St Lucia, Jamaica, Haiti and the Bahamas voting in favour of accepting Tarre “as the National Assembly’s designated permanent representative, pending new elections and the appointment of a democratically elected government,” in the South American country.

But Antigua and Barbuda, Dominica, Grenada, St. Vincent and the Grenadines, Suriname, joined Venezuela in voting against the measure, while Barbados, Guyana, St Kitts- Nevis, and Trinidad and Tobago abstained. Belize was the only CARICOM country absent when the vote was taken on Tuesday.