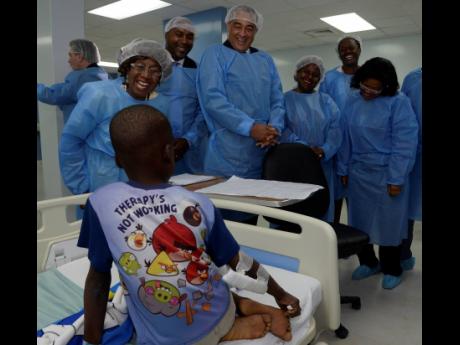 Health Minister Dr Christopher Tufton has announced plans for a $100-million 20-bed facility to support pre- and post-care patients of the catheterisation laboratory at the Bustamante Hospital for Children.

“We have done the costing and I want to announce that in the spirit of demonstrating the Government’s commitment to this cause, I have asked both the National Health Fund (NHF) and the CHASE Fund to contribute a collective total of $20 million to that effort,” Tufton stated following the official opening of a state-of-the-art cardiac centre at the hospital.

Unveiling an artist’s impression of the proposed building, Tufton said that his ministry looked at the requirements to complete the process of cardiac care at the children’s hospital.

“I got the NHF team working with the regional authority and having discussions with some of the partners to do a technical assessment, and I know our partners will embrace and endorse [with additional support],” the minister noted.

Tufton committed to deliver the building within a year after approvals are given.

Approximately 400 children are born each year in Jamaica with congenital heart disease, half of whom will require some form of corrective procedure, either by open-heart surgery or catheter interventions.

Also prevalent in Jamaica’s children is rheumatic heart disease, which contributes to the pool of patients needing cardiac interventions at the Bustamante Hospital for Children, where the first open-heart surgery was done in 2005.

There are nearly 200 paediatric patients currently awaiting surgery in Jamaica and the cardiac centre’s opening yesterday is welcome news for them.

“The Government, with a number of stakeholders, has made significant investments in staffing, training and development, medical supplies and pharmaceuticals,” said Tufton.

Construction of the centre was undertaken through funding from the Ministry of Health, South East Regional Health Authority, Chain of Hope UK, Gift of Life International, Rotary International, Sagicor Foundation, Shaggy Make a Difference Foundation, Digicel Foundation, and the NHF.