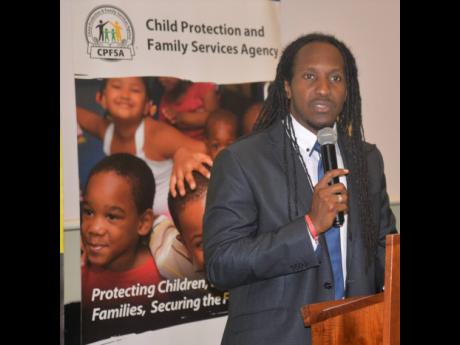 Alando Terrelonge, minister of state in the Ministry of Education, Youth and Information, says that legislation is in the pipeline for parents who abuse and abandon their children to automatically lose their parental rights once the child has been in the care of the state for at least nine months.

Terrelonge, who was speaking earlier this week at the Child Protection and Family Services Agency’s (CPFSA) Field Services Conference at the Iberostar Hotel in Montego Bay, said the amendments are now being done to the country’s adoption policy. He said it will make it easier for persons to adopt children from state-care facilities into a wholesome family setting.

“I have already made the recommendation that no child that has been abandoned, neglected or treated less than a human being by any parent should be kept in state facilities for more than nine to 12 months; it is not fair to the children,” said Terrelonge.

BEST INTEREST OF THE CHILD

Terrelonge said that while parents have rights, they should be weighed and exercised in the best interest of their children.

“The minute you start to abuse those children, the minute you abandon them, the minute you neglect them, that is the very same day that you have abandoned your parental rights, and it is time that we address that as a society,” the state minister said.

“We have heard of too many children being left in state care for two years and three years and can’t get adopted. We’ve heard of a list of over 100 and 200 names of families who want to adopt children and they can’t. Why? Because we are so concerned about parental rights and who is going to come back and say they want back their children,” Terrelonge continued.

He urged Rosalee Gage-Grey, CEO of the CPFSA, to be proactive in getting the court to approve adoptions expeditiously.

“The minute you have abandoned your child, you’ve abandoned your rights and we must put an end to it. So Mrs Gage-Grey, I have made the recommendations that once nine months or 12 months have passed, then we must go to the court and say, ‘Judge, this particular parent has relinquished their rights because they have abandoned their child for the same nine months that it took them to carry the child,” said Terrelonge.

“And so having the court order made, the adoption process can, in fact, go through. That is the future of childcare in Jamaica. I want to [assure] Mrs Gage-Grey and her team that we [are] all working together to ensure that the amendments to the adoption regulations, that those regulations are dealt with swiftly. We have been speaking about the amendments for far too long,” added Terrelonge.