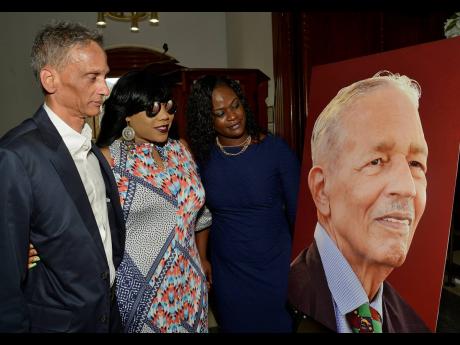 That was how Patrick Rousseau’s brother, Peter, remembered him during yesterday’s service to celebrate the life of the late attorney.

An avid sports fan and administrator, Rousseau was also hailed by his brother as a top-class negotiator, a businessman, and a family man.

“Pat’s achievement in life reflects our father’s love for sports. He was truly a remarkable man – a true renaissance man – and I came to the conclusion that the family life he enjoyed through the upbringing of our parents contributed in a very significant way,” Peter said in his reflection as he fought back tears.

Peter said Rousseau was brought up to respect everyone irrespective of their station in life. He was raised to value nationalism and embrace fair play and embodied these qualities in his life.

Yesterday’s service at the University Chapel at The University of the West Indies, Mona, saw family members, friends, and business associates turning out to celebrate the “stalwart of a man, whose life was well-lived”, as Peter put it.

He will probably be best remembered as a member of Jamaica’s bauxite negotiating team set up by then Prime Minister Michael Manley to secure better terms for the country in the bauxite and alumina industry. This led to the establishment of the bauxite production levy.

He was an active political organiser for the People’s National Party (PNP), especially during the Manley years, helping the party secure funding for projects and election activities.

A former president of the West Indies Cricket Board, Rousseau also represented Jamaica in hockey and once coached the island’s men’s and women’s hockey teams. He also loved football, boxing, and horse racing.

Among those who turned to to celebrate the life of the former Jamaica Broadcasting Corporation chairman were former prime ministers P.J. Patterson and Bruce Golding as well as current members of government, Opposition Leader Dr Peter Phillips, business executives, and several former cricket administrators.

He had been inducted into the Order of Jamaica, an award for his contribution to nation building.