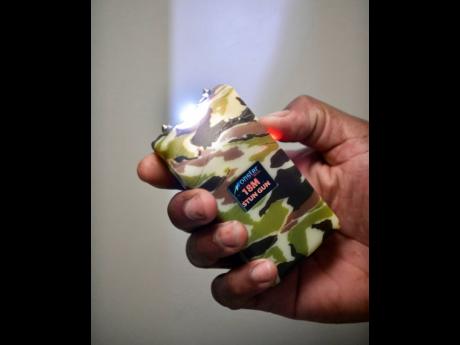 Gladstone Taylor
A photograph of an 18-million-volt stun gun which is easily purchased in Jamaica. Tasers are illegal to own without a permit or licence. 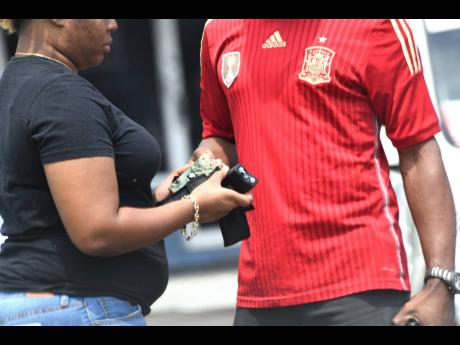 Rudolph Brown
A man purchases a taser in a Corporate Area parking lot on behalf of a friend. The 18-million-volt stun gun was purchased for $5,000.
1
2

Jamaican women are increasingly taking personal security into their own hands, arming themselves with generally non-lethal devices such as stun guns and pepper spray, even in contravention of the law.

Though both items are restricted under the Customs Act and require an import licence or permit, a locally based online store is supplying the market with both devices, evidence of an emerging phenomenon of vendors leaving the underworld and selling contraband in the open.

The Sunday Gleaner observed the purchase of a stun gun in Half-Way Tree, St Andrew, last week, after a buyer enquired about the item sold locally over the Internet. The vendor ran through a quick demonstration.

“When it’s fully charged, it will knock you out, you know, like make you unconscious,” said the seller.

Pressed about its legality, she sought to assure the purchaser that the police would not seize the stun gun if it was used for personal protection.

“Me ask ’bout police because a me get them into the country. Them say once you a use it fi self-defence, you all right, but if you just a idle, you can get in a trouble, but it’s for people in danger,” said the woman.

“Me sell to both (male and females), all o’ the pickney them up a UWI (The University of the West Indies), most of them me sell to. It save nuff a them. Just imagine this fully charge and you drop it pon somebody,” she said, during the sales pitch.

A stun gun or a taser uses high-voltage electricity and can disable muscle control and cause severe pain. But for persons with underlying health issues, it can prove deadly.

However, security consultant Mark Shields is urging the police and customs authorities to clamp down on the smuggling of tasers, which are crossing Jamaica’s porous borders.

“They’re far too dangerous. I’ve always thought that with offensive weapons, there is an extreme dilemma. ... There are plenty of people out there with firearms and other offensive weapons who use them to perpetrate crime.

“So even a pepper spray, as you can imagine, can be used as a weapon in the course of a robbery, so you incapacitate somebody as a way to steal a handbag or money or any other goods from a person on the street, and it is used frequently throughout the world for that very purpose, so anything that can be a defensive weapon can immediately become an offensive weapon,” said Shields.

The security consultant, who spent a stint on secondment as a deputy commissioner in Jamaica’s police force, said the demand is high for self-defence tools such as pepper spray.

The Briton is calling for legislators to amend the Offensive Weapons Prohibition Act of 2001 to specifically include stun guns as contraband.

“I know 100 per cent that in most countries in the world, tasers or stun guns are considered to be offensive weapons because the level of incapacity upon somebody is quite significant and, of course, it is far more dangerous than pepper spray or mace,” said Shields.

Gender advocate Nadeen Spence believes women should be fully empowered to arm themselves with non-lethal weapons.

“Women are going to have to take, I think, the initiative to find ways to defend themselves. I also think tasers and pepper spray work for women because it kind of gives them a front line of defence.

“A lot of this is about power, and so if women begin to exert power in the way that they can, then we might see a pushback in terms of the incidence, and I also believe women should go and get their licence to carry their gun,” said Spence.

Checks with The Jamaica Customs Agency lists stun gun, tasers and pepper spray as restricted items under Section 210 of the Customs Act, which dictates approval from the minister of national security and an import licence or permit.

“You need to apply for it (licence or permit) and then they would send us a letter saying they have no objection to us releasing it to you,” said a customs official who requested that their name not be published.

The official reiterated that the stipulation was absolute, irrespective of whether the motive was for personal protection or commercial benefit.