Take our light, give us water - Cassava Piece, Waterhouse grow restless over lack of commodity 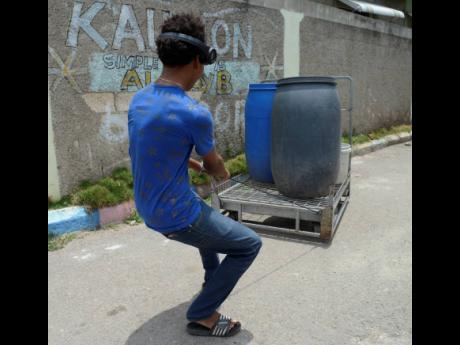 Ian Allen/Staff Reporter
A resident of Waterhouse in St Andrew uses a makeshift cart to transport two barrels and a bucket of water yesterday.

At least one resident of Waterhouse in St Andrew has hinted that some community members are contemplating blocking the major Washington Boulevard thoroughfare in protest over having to endure close to six months without water in their homes.

Their only source is a pipe at the Drewsland Health Centre in the community. According to Machael Trusty, it is the scene of countless fights as impatient residents square off over who should catch water next.

Yesterday afternoon, when The Gleaner visited the community, there were no lines or fights. Trusty explained that the apparent calm was because no water was coming from pipe at the moment.

“Di people want to go block up Washington Boulevard because nobody in the community has water. Right there, where we normally get water, you can see that there is no crowd, but if water did deh a di clinic, you would see one big crowd,” Trusty said. “If you come later, you would see the whole community block up the place a fight fi use the pipe. The one pipe cause war a daytime because dat a di only source.”

He called on West Central St Andrew Member of Parliament Andrew Holness, who is also the prime minister, to urgently address the problem, adding that it would be better if authorities swapped electricity for water.

“Mr Andrew Holness has not come around here to explain to the people. It better them take back the light and give us water. Me have candle and lamp, but without water, we can’t survive,” he said in frustration.

“Why they don’t make up more dams?” he asked.

Trusty said that with summer on the horizon and the situation so dire, the residents were growing more restless daily without word on when their suffering would be eased.

“When election time come, everybody come wanting us to vote and we can’t even get likkle water fi drink and summer a come. Wah we a go do? Mi need water fi drink. Mi youth dem need fi bathe and go school. We won’t be able to stop di people dem every time from going out on the main road [to cause problem]. I can’t keep telling them that everything going better and it nah better,” he lamented.

Actavia Commock told The Gleaner that things have been really hard on her because she is too sick to fetch water.

“When we want water, we have to go over the health centre with a whole heap of containers. Me nuh go because I have diabetic neuropathy in my hands and feet, so my son will go for me sometimes. It really, really hard and rough,” she said.

They said that water has a visiting relationship with their pipes at nights when most residents are asleep.

“If you don’t get up early, you won’t catch it,” one woman told The Gleaner.