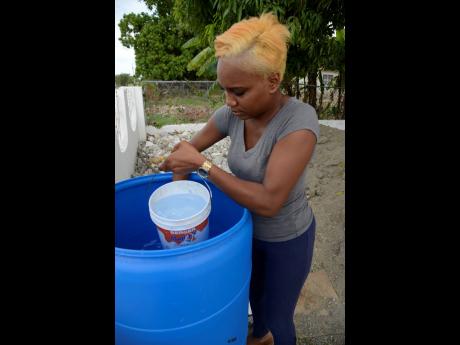 Ian Allen/Staff Photographer
Kimberly Cummings, a resident of Albion in St Thomas, is down to her last drum of water.

With no water running through their pipes for roughly two weeks, residents of Albion, St Thomas, say daily routines such as cooking decent meals and having a shower are becoming distant memories.

As if dry pipes were not enough, they also claim that the precious commodity is only being trucked to select homes in the community.

The drought has left many elderly and working people frustrated and has kept a number of children from school. Although administrators at the Grants Pen Primary and Infant School say water is delivered to them, canteen and other operations have been badly impacted.

Seventy-four-year-old Phyllis Thompson yesterday told The Gleaner that the situation has forced her to rely on her church sisters for assistance.

“They don’t come and say anything to us. All I heard is that the pump burn up. The situation is very bad. I have to carry bottles when I am going to church. This morning my church sister sent me some so I could wash up plates. Another church sister buys bottled water for me to drink.

“Even Monday morning, I was going to church and saw some children up the road and asked them why they weren’t in school. They said there was no water to wash their uniform,” the senior citizen said.

Kimberly Cummings, who lives a stone’s throw away from Thompson, revealed that bread has become her family’s best friend as they have been forced to adjust their diet, turning to meals which do not require cooking or a lot of water in their bid to conserve.

“It has been very difficult because I have a young child and a 95-year-old grandmother inside. We can’t even cook. Chicken takes a whole lot of water to clean and then to cook it. Rice takes whole heap of water. Bread has become our new best friend,” she told The Gleaner.

She revealed that her mother, a nurse, has not been able to wash her uniforms properly, and this poses potential health risks to patients.

“My mother is a nurse and has white uniforms that need to get washed, and that is next to impossible. She has to struggle with it in a little bit of water, which is so unhealthy because she works at a hospital,” Cummings said.

“My son goes to high school in Kingston and we have to go to another community to ask somebody to wash his clothes. We can’t even wash our faces. We can only wipe,” she stressed.

Annie Smith, assistant treasurer of the Albion Citizens’ Association, said not being officially notified of the extended water lock-off period by National Water Commission “is gross disrespect”. She said prior to this current spell, the community had experienced periodic water shortages.

“Water Commission did not contact us. A lot of returning residents and elderly persons live here. If something like this is happening, they should communicate with citizens and give them water. Water truck comes into Albion, but doesn’t blow its horn.

“About three months or more before the pump stopped working, water used to go away, but mostly on Saturdays, and is not everybody have tank down here. First time, we could go to the Yallahs River, where people could go and wash and catch water, but it has become a sand-mining bed,” Smith lamented.