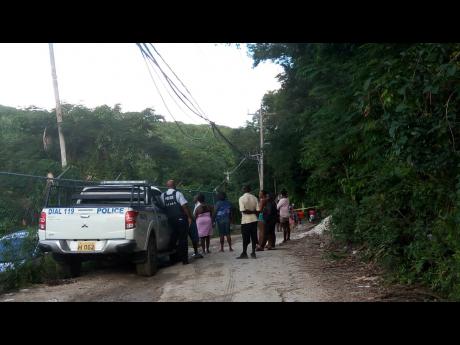 Photo by Hopeton Bucknor
The secluded section of Brandon Hill near downtown Montego Bay, where the body of the missing taxi operator, Horace Roseway, was found.

A Montego Bay taxi operator who went missing from his home on Tuesday was found dead in an open lot along Brandon Hill, near downtown Montego Bay, on Thursday, heightening fears that criminals are still carrying out brazen attacks despite the ongoing state of public emergency (SOE) in St James and two other western parishes.

In the aftermath of the discovery of the body, which had an electrical cord around the neck and the head bashed in, a 23-year-old entertainment coordinator employed to a Montego Bay-based hotel was taken into custody and is considered the prime suspect in the killing.

The deceased taxi operator has been identified as 49-year-old Horace Roseway of a Rosemount Crescent address in Montego Bay. The suspect is from the same community.

When The Gleaner visited Rosemount Crescent yesterday, some residents said they were surprised by the killing.

They expressed concern that despite the ongoing SOE, the zone of special operation in the adjoining Mount Salem community, and the Operation Restore Paradise project in downtown Montego Bay, killings are still taking place.

Late Tuesday afternoon, relatives of Roseway reported the taxi operator and his car missing. Investigations led cops to the entertainment coordinator, who was caught driving the missing car.

When he was questioned, the entertainment coordinator reportedly led the police to an open lot on Brandon Hill, where Roseway’s decomposing body was found wrapped in a sheet and placed underneath a sheet of zinc. A piece of cable wire was tied around his neck and a bloodied stone found beside the head.