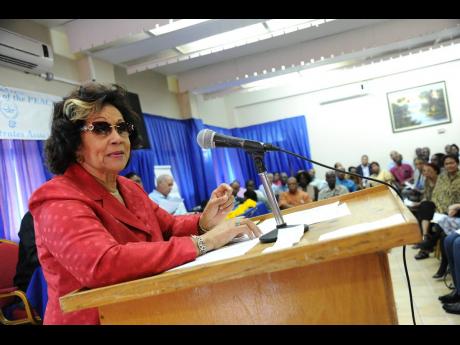 File
Marigold Harding, chairman of the Edna Manley College board.

The board of the Edna Manley College of the Visual and Performing Arts is expected to discuss the sexual harassment allegations rocking the St Andrew-based fine arts school at a board meeting today.

Several alleged victims of sexual harassment perpetrated by a male lecturer at the institution detailed their traumatic experiences in a Sunday Gleaner exposé on the weekend. The victims complained that school administrators have not treated the complaints with urgency and seriousness.

The Gleaner has been informed that today’s meeting will be examining the explosive allegations of a cover-up as it seeks answers on how school administrators dealt with the complaints.

“I obviously would not want to say too much until we have had an opportunity to meet as a board,” Chairman Marigold Harding told The Gleaner yesterday. “I will, however, say that I am more than concerned about what I have been hearing, as I knew nothing about this.”

Harding, who was appointed board chairman last November, said it would be “unbelievable” if complaints were made to administrators by the alleged victims and “nothing was done”.

She said following today’s meeting, she will meet with Karl Samuda, the minister with responsibility for education.

When contacted, Samuda told The Gleaner that he didn’t want to pre-empt the meeting of the board by offering much by way of comment.

“The board must be given its own independence to deal with the situation,” he said. “I will, however, say this: If there is evidence, even without confirmation, the alleged perpetrator should be sent on leave.”

But even as the board is set for what could be a tumultuous Tuesday for Edna Manley, more persons have been coming forward, including a report that implicates another male teacher.

“I have a 15-year-old daughter who started out doing Edna Manley’s summer programmes from before she could hardly speak, ... so you must know how young she was,” one parent wrote in an email to The Gleaner. “Anyway, last summer (2018), one afternoon after camp, I went to pick her up as I would usually do. She was visibly distressed ... . So, too, were her friends who were with her. When I asked what had happened, she began telling me that a summer school teacher had assaulted her, touched her inappropriately while whispering in her ear and calling her his girlfriend.”

The parent said she immediately went to the police to make a report. The mother she said went to the school and her daughter was withdrawn from all of that lecturer’s classes.

The mother said she decided to come forward after reading the stories in The Sunday Gleaner, adding, “I didn’t take it further because I didn’t want to take my already-traumatised daughter through the court system.”

For her part, Sauna Richards, who attended Edna Manley College between 2013 and 2017, where she graduated with a bachelor’s degree in fashion design, said she, too, was sexually harassed repeatedly by the lecturer at the centre of The Sunday Gleaner’s exposé.

“I first met him in my first year ... , where he openly made sexual suggestions to me and other girls,” revealed Richards, who gave The Gleaner permission to disclose her identity.

“One day while I was in his office, he started to tell me what he wanted to do with my body, so I got up to leave. He cornered me against the wall and tried to kiss me. I wriggled free and left his office in a hurry. I always blamed myself for going to his office in the first place,” she said.