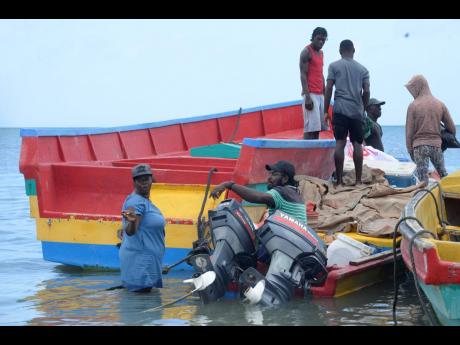 Lionel Rookwood/Photographer
Fisherwoman Shernette Douglas (left) gets assistance from other fishermen in Rocky Point, Clarendon, to load and prepare her boat for sea yesterday.

Residents of Rocky Point, Clarendon, are relishing a welcome respite from violent crimes gripping other sections of the parish and are hoping the peace will remain for a long time.

The fishing town on the island’s south coast is, however, fighting a battle with thugs who – sometimes armed with high-powered weapons – prey on their lifestock and their daily fishing haul, threatening their livelihood.

A police source told The Gleaner that while the scourge of praedial larceny affects several sections of the island, Clarendon farmers are sometimes given quite a scare as criminals with M16s raid their farms to snatch mainly goats. A number of murders have also been linked to these farm raids.

Law-enforcement officials have also linked animal theft to a meat-for-guns trade between local gangsters and their counterparts in Haiti.

“Two weeks ago, mi get two goat from mi uncle and dem gone wid dem in no time. Recently, my boss did have one goat tie up for his birthday. His yard is fenced, and one morning, him wake up and not even the rope him nuh see,” Lloyd Williams told The Gleaner yesterday.

“Dem steal fish. Dem lick off di people dem lock pon dem beach shed and tek out everything go sell different place. Down here in Rocky Point, Clarendon, generally, man will know you have a barrage of goats and trail you wid long gun. All four to five man will come fi tek weh your goats from you,” he said.

Despite those issues, Williams is happy with the prevailing peace.

“Since the year start, a peace. In a last year, a just bere gunshot. One time, once you hear a shot buss, just believe me seh you a go down di road go look pon duppy. Nowadays, if you hear a shot, a mussi bird man a shoot,” he said.

An elderly woman, who identified herself only as ‘Doris’, praised Jehovah for moving through the community for the past six months.

“Di violence nuh too deh ‘bout again in Rocky Point. Is like Jehovah a work yah now. One time, mi just coward suh. Now mi can all sidung pon mi step whole night. Sometimes we go ova di church and pray right down till daylight, and it look like Jehovah hear we. Di place cool man,” she said. “Di only thing, though, is that the youth dem in a Clarendon nuh have nuh work. Di good thing about Rocky Point is that these youth can go fishing and so on to make a living.”

One man, who asked The Gleaner to refer to him as ‘Chef’, said up to last year, even our news team might have had difficulty entering Rocky Point due to the unstable and often-dangerous climate.

“A just since year things calm down. ... Even pon di Rocky Point beach cool yah now. One time, a run dem woulda run you (news team) from the district!” he exclaimed.