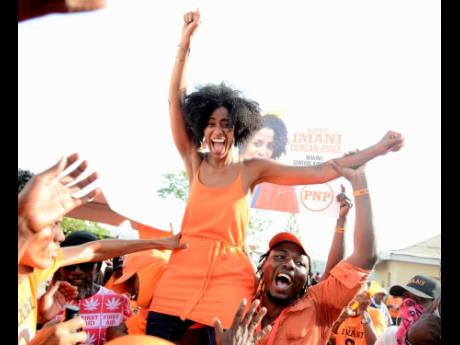 Ian Allen
Imani Duncan-Price is held aloft by supporters at the People’s National Party headquarters after she was declared the winner of an internal run-off in the Central Kingston constituency yesterday. 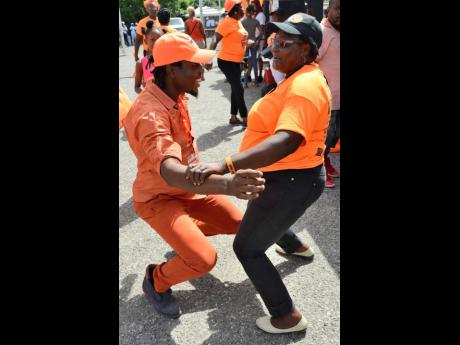 Rival supporters engaged in a war of words as dramatic scenes unfolded at the People’s National Party (PNP) headquarters yesterday when it was announced that Imani Duncan-Price had turned back the challenge of four others vying for the powerful position of chairman of the Central Kingston constituency organisation.

Duncan-Price will replace Ronald Thwaites, who will be exiting the political scene having been the man in charge of the constituency since 2007, and before that, in 1997, serving for a term.

Immediately after the results were announced, Duncan-Price was hoisted by supporters, who paraded her around the grounds of the PNP’s 89 Old Hope Road headquarters as she punched the air.

Others around her danced while music blared from speakers erected in front of a tent the Duncan-Price camp had assembled.

An ecstatic Duncan-Price told The Sunday Gleaner yesterday that she was ecstatic with the win and was looking forward to working with her supporters to strengthen the seat for the PNP, which has been losing ground over the years.

She also committed to fulfilling her “obligations” by carrying through a controversial loan scheme launched last week, which sparked cries of vote-buying by her rivals.

“It went as was expected. Based on our canvass, which we kept checking and rechecking, our numbers carried steady, and I am glad that the Comrades and delegates came out as they had committed. We were aware that whether it was a two-person race or a five-person race, we had the numbers,” Duncan-Price said as she weighed in on the results.

“Anybody looking at the numbers objectively over the last few elections would have seen a decline in the actual turnout for the PNP, and I think any political organisation would have to look at very seriously. So I am aware of challenges, in particular in the Rae Town division,” she said, referring to the bloc from which main challenger, Pryce, picked up most of his support.

Currently, the Rae Town division is held by the Jamaica Labour Party, which won it by a single vote in the last local government election to take control of the Kingston and St Andrew Municipal Corporation in November 2016.

But amid the celebrations, D.K. Duncan, father of Imani and former general secretary of the PNP, got embroiled in a heated exchange with a supporter of the opposition camp who allegedly said that the seat would fall into the hands of the JLP under Duncan-Price’s control.

Duncan, who left the grounds of the PNP headquarters along with a several men behind him, marched to an adjoining property, where he and a woman engaged in a shouting match.

“Me nah tek nuh f***ing feistiness from none of them. The election done, you know,” Duncan charged as he faced off with the woman.

He lamented that he had been accused of hurling abusive language at Jennifer Housen, the campaign manager of Pryce.

But the supporter fired back at him and told him to stand down and “keep your hands out of my face”.

“See wah hot up unnu head yah. A true dem lose dem a cause problem. Unnu go pon the wrong ship and fi dem vote alone can’t turn Central Kingston,” one lady shouted loudly before the police and a group of men sought to defuse the situation, which had threatened to get ugly.

Reeling from yesterday’s loss, some Raymond Pryce supporters predicted that the seat would fall into the hands JLP.

“She cyah manage Andrew [Holness]. So a one more seat that gone and election nuh call yet. What a destruction dem call dung pon PNP!” a supporter shouted in the mic of the Gleaner news team before making her way into a waiting car, which left the PNP headquarters in a hurry.

But Duncan-Price appeared not to be perturbed by a continuous stream of supporters coming to her to inform her of the rage in the Pryce camp to the north of the main building.

“That’s all right. That’s okay. Me would be vex, too, if me lose, and I would bawl. After putting in so much effort and money, all of that, you wouldn’t vex, too, if we lose?” the elected chairman said as she gazed at a few Pryce supporters.