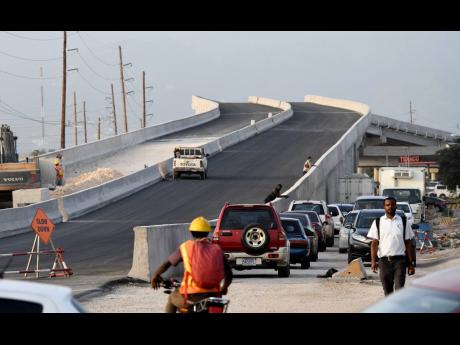 Ricardo Makyn
Motorists travel along a section of Marcus Garvey Drive, adjacent to the overpass which connects Marcus Garvey Drive to Hagley Park Road in St Andrew. The roadway is currently under construction and is expected to be completed by the end of August.

Though the Andrew Holness administration has spent hundreds of billions of dollars on infrastructure development, primarily roadwork in the Corporate Area, People’s National Party (PNP) leadership aspirant Peter Bunting has declared this will not be enough to secure a Jamaica Labour Party (JLP) victory at the next general election.

Bunting was speaking during a Gleaner Editors’ Forum last Thursday, where he argued that voters would not be swayed by the massive roadworks which are primarily focused in sections of the Corporate Area, leaving most rural areas neglected and wanting.

“If you look at history, it’s interesting; when the Old Harbour bypass, which is now part of the East/West Highway, was built, a lot of work was done in two constituencies – South West St Catherine and South East Clarendon. In the election after that, we lost both of those constituencies,” said Bunting, using the experience of the PNP as an example.

“So, I don’t think there is a correlation, if you look at it historically, between seeing a lot of construction and that necessarily applying to the incumbent party winning the election,” he argued, adding that work on sites such as Constant Spring Road and the Mandela Highway now being done by the Government are of limited benefit to locals.

More than $800 billion has been allocated by the Government to the Major Infrastructure Development Programme this fiscal year, and, according to Finance Minister Nigel Clarke, the money will be used to, among other things, widen and install street lights on Hagley Park Road in St Andrew, complete the Mandela Highway improvement project and complete works on Barbican Road in St Andrew. Funds will also go towards the Mackfield Road Rehabilitation Project in Westmoreland.

Bunting, however, was not impressed last Thursday.

“A lot of that construction, the only benefit the local economy is getting is a few flagmen and truck drivers, because it is happening in a very closed, enclave-type environment where all the engineers, all the equipment and things come from just a few people,” Bunting argued.

“There are no linkages back into the local economy. In fact, it is hurting the local businesses,” he argued.

Bunting has challenged PNP President Dr Peter Phillips for the leadership of the 81-year-old party, describing his reign as uninspiring, detached and unable to put up a meaningful challenge against the JLP in a general election.

The nomination period opens July 22 and ends July 26, while the vote will take place on September 7.