Having no ID could spell trouble in US immigration sweep – attorney 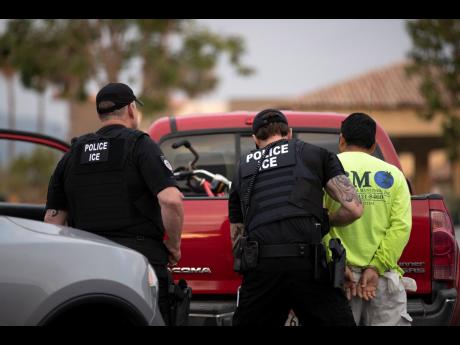 AP
In this July 8, 2019 photo, US Immigration and Customs Enforcement officers detain a man during an operation in California. The carefully orchestrated arrest last week in this San Diego suburb illustrates how President Donald Trump’s pledge to start deporting millions of people in the country illegally is virtually impossible with ICE’s budget and its method of picking people up, according to critics.

It is likely that undocumented immigrants in 10 major United States cities who have not received orders to leave that country may still find themselves in hot water despite them not being the target of the latest operations launched by the Immigration and Customs Enforcement (ICE), according to a New York-based immigration attorney.

The latest operation, which got under way on the weekend, was aimed at deporting persons who were previously issued with removal orders but who never returned to their homeland.

Attorney Millicent Clarke pointed out that not having any official identification could be the start of woes for those in the US illegally who have managed to stay off the ICE radar so far.

What could present as a saving grace for individuals in such a position, though, according to Clarke, is that ICE is strapped for resources and is likely to lock in on intended targets than to conduct the wide, sweeping raids many fear.

“A number of people have called me because they are afraid. If an immigration officer approaches you and says, ‘Show me some ID’ and you have none, there is reason to believe you are an illegal alien, especially if you have a strong Caribbean accent with Rasta locks and dress a certain way. The likelihood is that you are an illegal alien. If they stop someone who is Hispanic and they have no ID, that is reason to believe,” she told The Gleaner yesterday.

Clarke explained that the authorities may not be able to carry out willy-nilly checks because of a number of key factors.

“I don’t think they will be rounding up everybody believed to be illegal, but usually when you have a list of people to go out and look for, they can’t afford to just take up other people in the car,” she pointed out. “They could be sitting around all day waiting for just one person on their list. What they might do is call other agents to come in if they have a real problem, but vans and trucks are usually limited.”

“The process started Sunday and they were supposed to be in major cities, but what will happen with all the people in rural America harvesting on the large farms? Why aren’t these big companies that own these large farms being targeted? They are going after the little guys, but not the people doing their agricultural work,” she said.

“There is a lack of sincerity about the immigration service and Homeland Security. The United States’ government has never really taken a solid position on immigration. When it comes to immigration, you have a bunch of people going one way and another bunch going the other way. It has never been a real priority [until now].”