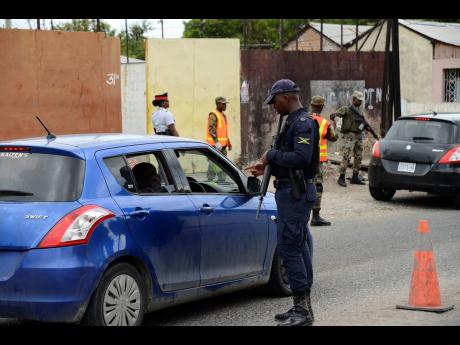 Ian Allen/Photographer
Members of the Jamaica Defence Force and the Jamaica Constabulary Force (JCF) conducting operations at a checkpoint along Waltham Park Road in the St Andrew South Police Division last Wednesday. The security measure, which was last week declared for an initial period of 14 days, has been extended until September.

The number of murders recorded nationally in the 10 weeks immediately following a declaration of a state of emergency (SOE) across three western parishes soared by 21 per cent when compared with the corresponding period last year, opposition Member of Parliament Peter Bunting has asserted.

Bunting, a former minister of national security, used the figure to challenge claims by Prime Minister Andrew Holness that the SOEs have been effective in stemming the country’s murder rate.

Citing the latest crime statistics, Holness revealed that murders were down in at least eight of the 19 police divisions islandwide, including Kingston Western and St Catherine North, where SOEs were imposed last year.

Conversely, he noted that St James – which was under an SOE for a year ending in January 2019 – saw an immediate uptick in murders after the parliamentary Opposition voted not to support an extension of the enhanced security measure.

“The lesson from that, Mr Speaker, is that the state of public emergency is a very effective tool in controlling the geographical spaces in which murders are occurring,” Holness said in the House of Representatives yesterday as he asked lawmakers to extend the latest SOE declared last week in the St Andrew South Police Division.

“If they (SOEs) are used in a coordinated way, in a very effective way, as was seen last year, they can bring down the national murder rate,” the prime minister insisted.

But in challenging this claim, Bunting disclosed that in two and a half months after an SOE was imposed in St James, Hanover and Westmoreland on April 30, a total of 288 murders were recorded nationally, compared to 237 for the similar period last year.

Further, the Central Manchester member of parliament said police statistics show that up to April 27, murders were down eight per cent over the first four months of this year, falling from 475 last year to 434.

“How can you say that is, without question, a very effective tool when murders for the comparative period last year compared with this year are up 21.5 per cent?” he questioned.

The South St Andrew SOE will remain in effect until early September after 44 lawmakers, including Opposition Leader Dr Peter Phillips, voted to extend it.

“I will support the state of emergency because the communities want some relief from the immediate terror that they are experiencing,” Phillips said during the debate on the extension of the SOE.

Bunting and Member of Parliament for St Andrew South, Mark Golding, voted against an extension.

Since the start of the year, Jamaica has recorded 726 murders, Holness told the House yesterday. This is a one per cent increase when compared with the corresponding period last year.