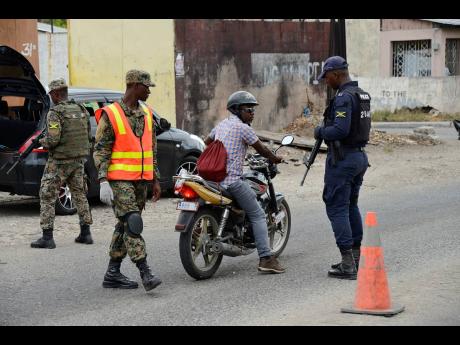 File
Members of the Jamaica Defence Force and the Jamaica Constabulary Force manning a security checkpoint along a section of Waltham Park Road under the state of emergency in the St Andrew South Police Division on July 10.

A total of 402 murders and 441 shooting incidents were recorded in the last 30 months across the communities that fall within the St Andrew South Police Division, government Senator Kamina Johnson Smith has revealed.

Johnson Smith, the leader of government business in the Senate, said the figures meant that the division had the second highest aggregate count of murders and shootings in Jamaica between January 1, 2017, and July 2 this year.

Turning to 2019, the data reveal that the St Andrew South Police Division recorded 94 murders and 98 shootings, the highest for both categories across the 19 police divisions islandwide.

“The division accounted for 14 per cent of all murders and 15 per cent of all shooting incidents across all police divisions in Jamaica,” Johnson Smith said yesterday before the Senate voted to extend the state of emergency (SOE) that was imposed in St Andrew South on July 7.

The House of Representatives voted on Tuesday to extend the enhanced security measure.

Johnson Smith, in making the case for the extension, revealed that the 94 murders in the St Andrew South Police Division this year represents a 19 per cent jump when compared with the corresponding period last year while the 98 shootings was a 40 per cent hike.

“If the rate of murder experienced over that period (January to July 2) was allowed to continue without intervention, it’s predicted that it would result in as many as 190 murders in the division and would represent an increase of 28 per cent when compared with the relevant period in 2018, when 148 murders were recorded in the division, already a frightening number of lives lost,” she said, adding that the rate of violent crime in the division was a testament to the prevalence of guns and gangs.

“Although the intelligence reflects a much higher number of gangs, they have identified 25 active gangs, with inter- and intra-gang feuds manifesting in violent confrontations, reprisal killings, and counter-reprisals,” Johnson Smith said.

“Importantly, the impact of gang warfare in the space has instilled fear – consistent fear – among the residents and has caused significant disruptions to the livelihood of citizens in sections of the division,” she added.

The parliamentary Opposition reiterated their concerns that the Andrew Holness administration was using the enhanced security measure as a routine crime-fighting tool because it had no clearly articulated crime plan.