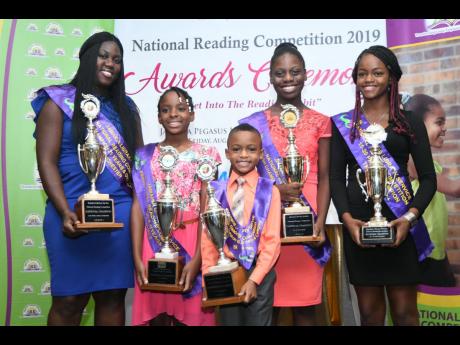 Rudolph Brown/Photographer
The national champions for the five age groups in the Jamaica Library Service’s National Reading Competition pose with their awards at yesterday’s presentation ceremony at The Jamaica Pegasus hotel. From left are Sanikia Powell-Morgan of Manchester, Natajia Newton of St James, Travis Kerr of St James, Jo’Anna Hill of St James, and Kaliesha Gager of Trelawny.

Three of the five national champions in the Jamaica Library Service National Reading Competition 2019 emerged from the parish of St James.

At the awards ceremony held at The Jamaica Pegasus hotel yesterday, 65 parish champions across five age categories were celebrated.

The competition began at the parish library level in March with more than 3,700 entrants and culminated with the national finals on August 22.

Seven-year-old Travis Kerr, the national champion for the 6-8 age group, aspires to be a cardiologist. He received the prizes for obtaining the most points in the children category as well as overall in the competition.

“I feel excited. I was just working hard and reading a lot of books,” he said.

His favourite book in the competition was My Caribbean Grandma because the grandmother was kind and loving.

Natajia Newton, who has been entering the competition annually since 2015 and who topped the 6-8 category in 2016, is now the 9-11 national champion.

“I had a lot of fun in the competition, and I met new friends ... . From I was young, I liked to explore, but since I couldn’t really go beyond Jamaica, I stayed with the books,” she said.

Newton said she was not quick enough on the buzzers and did not expect to win. She is heading to Hampton School come September.

Jo’Anna Hill, also from St James, is now a second-time champion, having won the 9-11 category in 2017. She said that her mother started reading to her when she was just a couple months old.

“It has been a very enlightening and educational experience. It has exposed me to Caribbean and Jamaican authors and books,” she said, reflecting on the competition.

“It was full of mystery and intrigue, and it was also very realistic,” she said.

The St James Parish Library also received the award for accumulating the highest points across all categories in the finals. The library’s facilities will be renovated with 30 gallons of paint, bean bags, and fans donated by sponsors.

Kaliesha Gager, who is attached to the Albert Town Branch Library in Trelawny, emerged the national champion for the 15-20 category.

“I did not enter because I like to read. I entered because one of my friends was entering. I kept coming back because I like the prizes ... . We have been coming together and to get the one-two finish, it’s really great,” she said.

Gager secured the place of national runner-up champion for the same category in 2016 and 2018. She harbours dreams of becoming a corporate lawyer and plans to enter the competition again when she is eligible for the 21 and over category.

The champion for the largest category, 21 years and over, Sanikia Powell-Morgan, expressed her thanks to the organisers for rewarding the participants for an activity they already loved to do.

“We have no choice but to go forward and to be ambassadors for the Jamaica Library Service and for the art of reading,” she said.

Powell-Morgan is from the Mile Gully Branch Library in Manchester and was a national champion for the 12-14 category in 2013. She was also awarded for receiving the highest points in the adult category.

Director of Ntukuma, The Storytelling Foundation of Jamaica, Amina Blackwood-Meeks, spoke on the competition’s theme, ‘Get Into the Reading Habit’.

She recalled that growing up, her mother placed a strong emphasis on books.

“If Miss Pearl see yuh sit down and yuh look idle and not doing anything, she jus seh, ‘Book! Book! Book!’ ... I learnt to read whether I liked it or not,” she said.

The awards ceremony coincided with International Day for the Remembrance of the Slave Trade and its Abolition, and Blackwood-Meeks expressed her appreciation to the Jamaica Library Service for including Caribbean and African literature, which participants might not have been otherwise exposed to.

The national champions will be presented to Prime Minister Andrew Holness in a courtesy call next month.