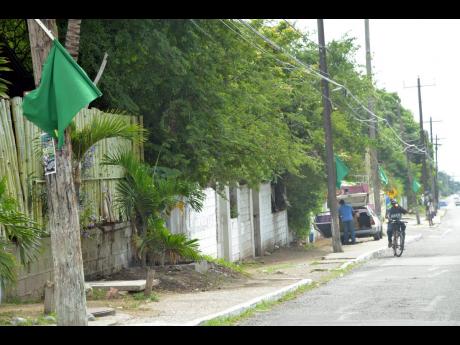 Orette Fisher, electoral consultant and former director of elections, last week pitched a solution to the problem of flags and other paraphernalia which remain in constituencies after an election period.

Sharing that he has observed elections in a number of jurisdictions, Fisher said that in 99 per cent of them, the colouring of the space is also a part of the elections.

“But what is done in those jurisdictions is that the local authority has the responsibility to clean up afterwards. For us, I think it’s one of two things: either after the elections, the local authorities must go through and clean up all the areas, or political parties are required to put a fund together, and if they don’t remove the flags, then the fund is used to take them down,” he said.

“It cannot just be left for the political ombudsman to be hitting away and asking, asking. Something has to be in place that would allow for it to be enforced,” Fisher said at a Gleaner Editors’ Forum at the newspaper’s downtown Kingston head offices last Thursday.

Senior lecturer in the Department of Government at The University of the West Indies, Mona, Dr Christopher Charles, pointed out that in Jamaica, if you want to mount something on a utility pole, there are established procedures through the parish council to do so.

“We do not encourage political parties to apply to mount these flags. All we hear is that you can’t put up a flag. That is curtailing people’s right to free expression,” he said. “I don’t see anything wrong with mounting a political flag of any colour as long as the person gets approval.”

Political Ombudsman Donna Parchment Brown agreed that where people have a permit, it should not be an issue once they put up and remove the flags in the appropriate time frame.

“What keeps coming to me is that I live in ‘Community X’, and when I got home this evening, there were flags all along the place, also on my gate post or my light post and I feel like I’m being intimidated ... . This is a problem,” the ombudsman explained.

Parchment Brown said there needs to be amendments to the Town and Country Planning Act, which speaks to putting up all forms of advertisements, to specify the duty, considering that local government is also run by politicians.