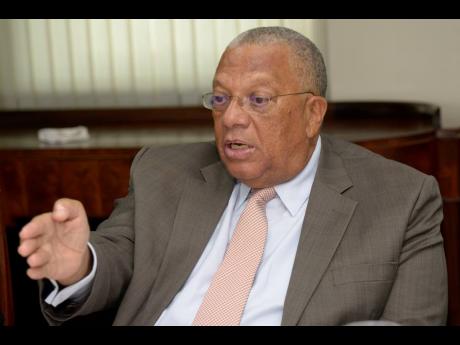 The Andrew Holness administration has pulled the plug on Operation ANTHEM – the Peter Phillips’ era electronic surveillance memorandum of understanding (MOU) with the United States and United Kingdom, signed in 2004 and allowing for the eavesdropping on telephone calls to disrupt and dismantle transnational criminal operations.

The operation has been ditched, reportedly for a new one with Israel, via Mossad – the feared and respected Israeli secret intelligence agency created in December 1949 by Israel’s co-founder David Ben-Gurion, the tentacles of which were not known or acknowledged until the 1960s.

On Thursday, during a Gleaner Editors’ Forum at the newspaper’s central Kingston offices, Opposition Leader Dr Peter Phillips said he was aware of “issues” under the MOUs signed a decade and a half ago.

“All I can tell you is that there have been interruptions in the free flow of information between us (Jamaica) and partners under interception agreement,” said Phillips, who was in attendance with select members of his shadow Cabinet, in response to questions from journalists.

However, a Sunday Gleaner Drug Enforcement Agency (DEA) source has indicated that, “since 2016, there has been no cooperation between Jamaica and the US”.

“Jamaica has pretty much left the agreement and we are not pleased at all. We have made those sentiments clear to your government… . It was under that agreement that we were able to dismantle much of the lottery scamming operations which originated in Montego Bay, Jamaica, and which stole an estimated US$1 billion from our citizens. Many of your countrymen and women are imprisoned here.”

Said the DEA official: “You should ask your government about their arrangement with Israel.”

Government officials, including Prime Minister Andrew Holness, have for at least the past year backed away from commenting on the arrangement with the Israelis, opting only to say it involves matters of national security.

Holness visited Israel in January 2017, but few details of the outcomes of discussions have ever been made public.

Intelligence operations in need of reform

A sceptical Julian Robinson, opposition spokesman on science and technology, has asked several questions about Jamaica’s arrangements with the Israelis.

During his Sectoral Debate presentation this year, Robinson sought information on whether Government has partnered with an Israeli company to provide cybersecurity services. Billions of dollars have been budgeted to support a cybersecurity initiative; and Israelis have been in Jamaica working closely with the nation’s security forces.

In the meantime, Opposition Leader Peter Phillips acknowledged that the country’s intelligence apparatus is in need of reform.

“Other areas in which were need reforms are in a proper national intelligence collection act because, right now, the task of policing always involves having good intelligence, converting intelligence into evidence that you can take to a court of law. And that involves protecting those who gather intelligence, and at the same time protecting citizens from the invasion of their privacy or the limitation in their rights,” he said.

He also acknowledged that advanced technology since has made “Jamaica’s one act – the Interception of Communication Act – already outmoded”.

The Phillips-backed MOUs were built on eavesdropping, and were commonly referred to as “secret MOUs”. They gave local and foreign law enforcement agencies the right to intercept landline and mobile phone conversations “in an effort to gather intelligence in the fight against drug trafficking and organised crime” under the programme named Operation ANTHEM.

The existence of the MOUs became public knowledge during the 2011 Commission of Enquiry into the Government’s handling of the United States’ extradition request for Tivoli Gardens don Christopher ‘Dudus’ Coke’, to answer drug and gun-running charges.

The United States (US) relied on wiretap information as evidence in the affidavits for Coke’s extradition, but the government argued that the wiretap evidence on which the US relied was illegally obtained in Jamaica. The US insisted it acted legally.

The issue resulted in a nine-month stand-off that strained relations between Kingston and Washington, and which led to bloodshed and a national security threat to the State.

The Sunday Gleaner subsequently learnt that the government amended the act to make it more difficult to obtain orders to intercept.