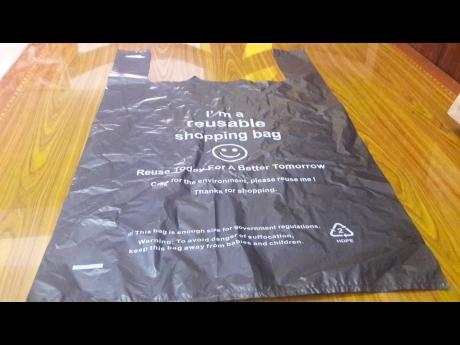 Photo by Albert Ferguson
One of the plastic bags issued by a supermarket in Falmouth, Trelawny.

Several business operators in Falmouth, Trelawny, appear to be flouting the Government’s ban on single-use plastic bags, which are widely being used in the market and supermarkets.

At the start of the year, the Government imposed a ban on the importation, manufacturing, distribution and use of all single-use plastic carrier bags, commonly called scandal bags, smaller than 24 inches by 24 inches, except those utilised to maintain public health or food-safety standards.

Cabinet Minister Daryl Vaz, who is leading the fight against single-use plastics, had said that the Government would also be going after persons who try to circumvent the ban by shaving or adding an inch or two to the bag sizes.

However, on Sunday, The Gleaner observed a Chinese supermarket operator in Falmouth conducting trade in defiance of the prohibition order. In fact, the bags being distributed made a mockery of the ban, as they carried an inscription that reads, in part: “I’m a reusable shopping bag. ... This bag is enough size for government regulations.”

When the bags were closely inspected, it was noticed that except for the inscription and a smiley face, it was the same outlawed bags which have been deemed an environmental nuisance.

Trelawny Chamber of Commerce President Delroy Christie said he has heard reports of the continued widespread use of the plastic bags in Falmouth, but said he had not seen any.

“I have heard that some supermarkets have them,” Christie told The Gleaner, adding that he believes it would take some time before the plastic bags disappear from the system completely.

When quizzed as to whether or not the Trelawny Chamber of Commerce had taken any steps to get its members to desist from selling and distributing the bags, Christie said the matter had been discussed.

“We really haven’t gone overboard, but we talked about it. I think everybody understands the importance of that (obeying the ban) because when we have a beach clean-up, they would have seen the amount of plastic that turn up,” said Christie.

The National Environment and Planning Agency, whose mandate spans environmental protection, announced earlier this month that it was keen on enforcement and would be targeting offenders in central and western Jamaica.

Since the ban on the use of single-use plastic bags, at least 16 individuals and businesses have been charged under the Trade (Plastic Packaging Materials Prohibition) Order, 2018. A Montego Bay businessman was given the maximum fine of $2 million or up to two years in prison after he was found with some 600 boxes of the banned plastic bags.