Police to roll out new technologies next year 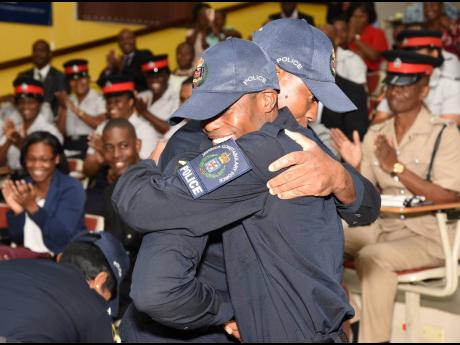 Ian Allen/Photographer
Police Corporal Dwayne Valentine (left) and Constable Christopher Boxx embrace after they were told that they were promoted by Major General Antony Anderson, commissioner of police, during the Jamaica Constabulary Force closing ceremony for the law-enforcement instructors’ training course. The event was held at the National Police College of Jamaica on Friday.

Cars fitted with a smart system that will allow cops to do on-the-spot checks of individuals and motor vehicles are among a range of new technologies to be rolled out by the Jamaican police next year.

Jamaica’s police chief, Major General Antony Anderson, has signalled that as part of his plan to improve the use of technology within the Jamaica Constabulary Force (JCF), police cars are to be fitted with licence plate recognition (LPR) cameras.

“We have a suite of technologies coming out in 2020,” Anderson disclosed yesterday.

“You [will] have LPR cameras on cars … so they are just checking randomly cars behind you, cars in front of you, and they can flag these cars from there and send it back to 119 centre,” he explained.

Anderson disclosed, too, that the police radio system will be fully restored and that the JCF has already completed an upgrade of its microwave network, which is expected to end the use of archaic station diaries.

“You can carry five times the amount of data you are carrying. Every single thing we have been talking ‘bout we are doing,” he insisted, while addressing the first batch of policemen and women to graduate from the JCF’s law-enforcement instructors’ training course at the National Police College of Jamaica in Twickenham Park, St Catherine.

Seventeen cops who participated in the course graduated with a postgraduate diploma in law-enforcement training and were promoted one rank.

“It’s a good day for some promotion,” the commissioner declared, setting off celebrations among the course participants.

Anderson explained that implementation of the new technologies will be phased over a two-year period.

“What that means is that we are likely to outpace our change management,” he said.

The commissioner said that the JCF plans to ramp up recruitment next year, but warned that there would be “a whole new range” of recruiting methods.

Anderson urged the policemen and women who participated in the course to help the JCF root out colleagues with bad attitudes and “integrity issues” and to be respectful to each other and the persons they serve.

“If we respect the least of us, then we will respect everyone else. It doesn’t require disrespect to get anything done. We can be as firm as ever and still have respect. It is that cycle of disrespect that we need to interrupt,” he said.