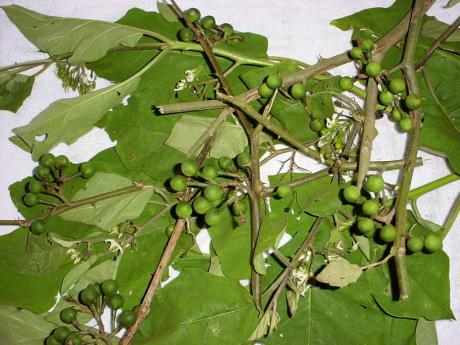 File
File The susumber plant with its berries.

Jamaicans are being warned not to eat susumber berries, more popularly called ‘susumba’ or gully beans, that appear underdeveloped or deformed as these could be poisonous and potentially deadly.

The call was made last week by Sherika Whitelocke-Ballingsingh, poison information coordinator at the Caribbean Poison Information Network (CARPIN). She noted a string of susumber poisoning cases – including overseas victims to whom the berries were sent by loved ones in Jamaica.

“Over the past five years in Jamaica, there have been sporadic cases of susumber poisoning through the consumption of different species. The first recorded case of susumber poisoning in Jamaica goes as far back as the 19th century,” said Whitelocke-Ballingsingh, adding that the cases reportedly stemmed from mixing variations of the berry.

“Other cases of poisoning associated with Jamaicans were seen in Toronto, Florida and New York in 2003, 2004, and 2006, respectively. Family members were hospitalised after the consumption of susumber that were taken from Jamaica as part of their cultural dish experience,” she continued, outlining that though susumber is quite bitter, it is the highlight of ackee and salt fish dishes for some Jamaicans.

Last October, Whitelock-Ballingsingh said, a Jamaican man came close to death after eating the beans and later falling ill during his sleep.

“He got up to go to the bathroom and could not sit by himself on the toilet. He couldn’t move, his tongue got heavy, and his hands couldn’t move. They actually had to lift him into the taxi,” said Whitelocke-Ballingsingh, noting that outside of examining the leaf, it is very difficult to determine what types of susumber beans are safe to consume.

That individual was treated and released, but Whitelocke-Ballingsingh is concerned that there are others who may have suffered more serious complications but their cases have gone under-reported.

Some victims experience a lack of muscle coordination, slurred speech, facial paralysis, and respiratory failure, which are often mistaken for a stroke, she said, adding that the symptoms usually occur hours after ingestion.

“What we are comparing now is the different cases … because one person might be slightly affected by this one and the other might be affected by another one. We are also trying to look at the Jamaican cases overseas,” said Whitelocke-Ballingsingh, noting that to date no study has been done of the toxicity of local variations of the susumber plant.

Against that background, Whitelock-Ballingsingh said she and colleague botanist Keron Campbell, of the Institute of Jamaica, have embarked on a probe to help shed light on the more than 21 species found locally.

“The only way to identify it is how the berry looks on the plant. You can’t look on the berry itself and know if it is poisonous … unless it is underdeveloped,” she said, noting that all the local variants of susumber look alike.