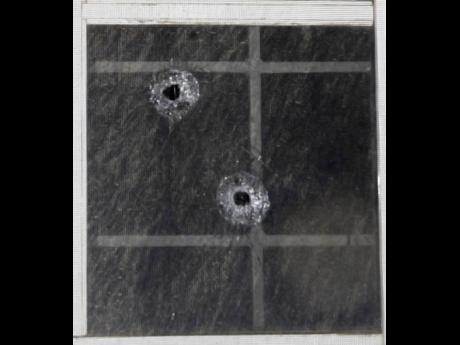 ERROL CROSBY/PHOTOGRAPHER
Bullet holes in a window are evidence of the deadly assault carried out by JDF Corporal Doran McKenzie at his Four West, Greater Portmore, home yesterday morning. 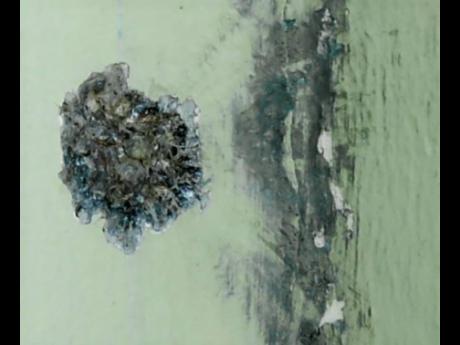 ERROL CROSBY/PHOTOGRAPHER
A wall was damaged by a bullet discharged from the Glock pistol used by Corporal Doran McKenzie in yesterday’s murder-suicide.
1
2

Before Jamaica Defence Force Corporal Doran McKenzie took his life with a Glock pistol on Sunday morning, he allegedly posted graphic images of Easy’s body on his WhatsApp status and distributed a voice note explaining why he committed the act, The Gleaner understands.

The narrative dovetails with the accounts of several neighbours who told our news team of a cold, calculated killer who was overheard on his veranda shortly after he launched a deadly attack on his girlfriend, Suianne Easy, some time after 2 a.m.

“After the shooting, he was heard telling somebody on the phone to come for him. Maybe a the army him a call, but then him go back in and shoot himself. Is when him see the light (police siren) him kill himself ‘cause whosoever him call wouldn’t come for him,” a resident, who requested that his identity not be revealed, said.

Around 11 a.m. on Sunday, our news team observed bloodstains in the living room and bedroom of the house. A light was still on in the bedroom.

Hours earlier, blood-curdling screams were heard as Easy, a practical nurse, was savagely chopped and shot to death.

Details from the police and military have been sketchy, but residents revealed a frantic bid by firefighters to gain entry to the premises before the magnitude of the corporal’s bloodlust became fully evident.

“We overheard the police said they found two magazines and they were empty, and each magazine carry 16. But before the fireman come and cut off the lock, one of the police look in through the window and said, ‘Spec, a nuh likkle bit a shot this ya man fire inna di place. When them go in, a whole heap o’ spent shell dem find inna the house,’” a source told The Gleaner.

Easy was allegedly told that McKenzie had expressed an intention to kill her hours before her death.

But another resident said that the army man’s smouldering rage had been burning even earlier. “Him say it in December say him a go kill her. She was actually told,” another source said.

Residents of 23rd Pathway in Four West, Greater Portmore, say that McKenzie’s deadly attack on his partner could have taken out more victims as at least two of the shots fired exited his dwelling and pierced the wall of a neighbouring house.

“Somebody else could have died from matters unknown to them. The bullet exit their house and go cross next door. It came through their window, hit a garbage bin, and into the wall next door,” a resident said.

A sombre mood enveloped the community yesterday, sapping the spirit of weekend joy and blunting the appetite for traditionally big Sunday breakfasts. Visits by family to McKenzie and Easy’s rented home were limited, residents said.

Neighbours of Easy and McKenzie were unwilling to share their identity because they feared being enmeshed in the unfolding murder-suicide investigation that will incorporate the police force and the army.

They said they were shocked at the grisly end at the death house, adding that McKenzie and Easy had kept up appearances as a loving couple.

“If they were having issues, we weren’t aware. Him walk with her handbag whenever they going out. It would appear as they were deep into their feelings. Dem inna love,” another resident told The Gleaner.

Easy, 34, and McKenzie, 33, had been living at the location for more than a year.

Omens of the bloody end had been evident on Saturday night.

A resident said, “Around after 12, him fire a wild shot earlier before the incident. Him fired in the air because he was drinking. Some people thought it was clappers because Christmas jus done. Him go at the shop and said he was going to kill her.”

NOTE: This story is updated. A previous version incorrectly stated that the Independent Commission of Investigation was a part of the investigation into the murder-suicide.